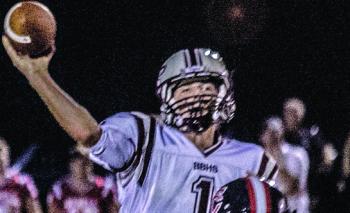 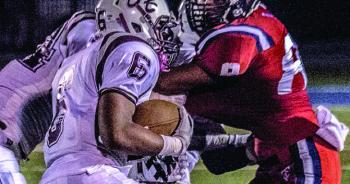 Breaux Bridge has already suffered two narrow defeats this season and last Friday’s 21-14 loss to District 5-4A rival Teurlings Catholic was another tough one to swallow.
With the score knotted at 14-all early in the fourth quarter the Tigers had not one, but two touchdowns nullified by holding penalties and five minutes later the Rebels scored the go-ahead TD to clinch the victory.
With the loss, Breaux Bridge slipped to 2-3 overall and 1-1 in district play while Teurlings improved to 3-2 and 2-0.
The Rebels drew first blood, going 58 yards in just three plays to score. Quarterback Brye Latiolais connected with Zach Lafleur for a 55-yard pickup to the BB 2 and Lafleur took it in for the TD just 4½ minutes into the game.
Teurlings stretched its lead to 14-0 two plays into the second quarter when Latiolais capped a 75-yard drive with a 17-yard TD strike to Grant LaGrange. Latiolais sparked the possession with a 28-yard completion to Sage LeBlanc on a 3rd-and-12 situation.
But Breaux Bridge finally got its offense cranking and put together a 72-yard drive that drained almost 7 minutes off the clock. Marquis Demonter, who led the Tigers with 59 yards on 16 carries, punched it in from 1 yard out with 2:46 left in the half.
After stopping Teurlings on a 4th-and-12 situation at midfield, the Tigers got the ball back with 1:24 remaining. Landry scrambled for 28 yards to the TC 22. A penalty against the Rebels moved the ball to the 11 and with just 9 seconds on the clock Dante Williams took a pass from Landry in for the score. Michael Vincent’s PAT tied the score at 14-all at intermission.

The two teams battled through a scoreless third stanza. Late in the period Breaux Bridge got excellent field position at the Rebel 27 following a botched punt attempt. But the Teurlings’ defense stiffened and a 25-yard field goal attempt failed.
The Tigers were soon back in business after Izrael Ledet picked off a Latiolais pass at the Rebel 37.
Landry hit Nick Belaire three plays later for an apparent TD, but the score was erased by a holding penalty. Then, with the ball at the 46, Landry connected with Demontreal Babineaux for another score, but once again the Tigers were flagged for holding. Michael Vincent tried a long field goal but missed the mark and once again Breaux Bridge came up empty.
In reply, Teurlings put the ball in the hands of Lafleur, its leading ball carrier. He reeled off runs of 9, 25, 8 and 11 yards to move the ball to the BB 15. Five plays later Lafleur muscled his way into the end zone from 1 yard out with 4:03 remaining for the go-ahead TD.
Breaux Bridge came battling back, with Landry getting loose for 19 yards and then hitting Javeyan Williams for 38-yard pickup to the Rebel 33. With the clock winding down, the Tigers picked up another first down at the 19, but on 4th-and-1 Babineaux was held to no gain and time expired.
Lafleur led all rushers with 112 yards on 20 workhorse carries.
Landry completed 13-of-26 attempts for 111 yards. His favorite target was Belaire, who had 5 catches for 44 yards.
The Tigers host Northside Friday in their homecoming game.