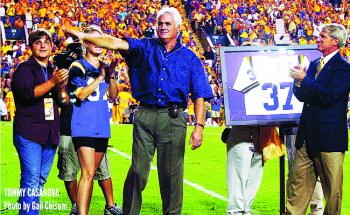 Dr. Thomas “Tommy” Casanova, center, waves to Tiger fans as his jersey — No. 37 — is retired during ceremonies in Tiger Stadium. On the field with their dad are son Dominick, left, and daughter Lauren, wearing purple jersey.(Tiger Rag)

LSU’s cover boy is still living the good life – more or less.
Dr. Thomas Casanova these days is tending to his ophthalmology practice in Crowley, a profession he loves almost beyond words – more or less.
His kids are on their way to their own adult lives. Daughter Lauren, who graduated from LSU two years ago, is in nursing school in Baton Rouge. Son Dominick, a gifted musician, is a student at LSU-Eunice. Wife Jeanne has some health issues, but is doing well.
“Yeah, life is pretty good,” said Casanova, who four decades ago became LSU’s only three-time football All-American and was featured on the cover of Sports Illustrated as “The Best Player in the Nation.”
Of his current situation, Casanova said, “I really love what I do. It’s very satisfying – more or less.”
Casanova specializes in eye-lid reconstruction for the injured, cancer victims and cosmetics. Helping those who need it makes his career more than worthwhile.
That’s the “more” part of more or less.
The “less” part is the bureaucratic end of health care. “It’s frustrating with the paperwork we have to deal with now, most of it with federal requirements.
“I think the most incompetent people on the face of the earth must be government bureaucrats, most in Washington, D.C. I swear, it seems like they care more about the paperwork than the patient.”
There’s also the matter of LSU football. Casanova doesn’t attend Tiger games as much as he once did. For a variety of reasons, it’s difficult for him to break away regularly. He said he’s become as much a fan of the baseball Tigers as he ever was of football, despite his No. 37 jersey being retired and a copy showcased along the upper deck of Tiger Stadium.
“I love the atmosphere, the stadium, the way they play,” Casanova said of the baseball team. “I watch a lot of games, mostly on television, sometimes in a friend’s suite, and its a real treat with thousands of people in the stands to see a college baseball game. I remember when maybe 50 people were in Alex Box watching games.”
He still pulls hard for the football Tigers, but these days he’s a bit less enthusiastic than he once was. Casanova thinks the win-loss record doesn’t match the talent level, which has sent 18 prospects to the NFL the last two seasons, more than any other school, but still managed to lose three games in each of those years, apparently to teams with fewer quality athletes.
“We had nine players drafted after last season, more than anyone,” Casanova noted, “but LSU was nowhere to be found among the elite teams. Something must be going on there. I sure don’t know what the problem is, but I don’t think they always play to their abilities. It’s a little frustrating.
“Of course, I’ll concede that going through the SEC is pretty rough. There are ranked teams everywhere. So it’s not easy. But nobody else had as many quality athletes as LSU, if you go by the NFL draft.”
Casanova knows a little about athleticism.

Tommy Casanova was a remarkable athlete, one of the most complete players ever to come out of Louisiana.
He was a defensive back, used in spot duty as a running back, and was a kick-returner. With 9.7-second 100-meter speed on the LSU track team, he would have liked to try his hand at wide receiver.
Then-coach Charlie McClendon said Casanova could have excelled at any position.
“He was tremendously gifted, one of the most gifted athletes I ever had,” McClendon assessed. “There’s no question he could have been an All-American running back and really could have jazzed up our offense, but I needed him more on defense.”
Indeed. Casanova’s sheer presence diverted opponents’ passing schemes to other parts of the field, and thanks to other superb defenders such as linebacker Mike Anderson and tackle Ronnie Estay, McClendon’s defense led the nation in 1970 by yielding a minuscule scoring average of 8.7 points a game.
Casanova played key roles in memorable Tiger games. Against highly-ranked Auburn in 1969, with the Alabama team inside the LSU 5-yard line, Casanova shot into the backfield to throw the runner for a crucial loss on fourth down in the 21-20 victory. Against Ole Miss in 1970, Casanova returned an NCAA-record tying two punt returns for touchdowns to secure the SEC championship. Against Notre Dame in 1970 and ’71 he neutralized the Irish’s passing game in a pair of nationally televised games.

A pro scout said after watching Casanova practice at LSU, “My wife could scout Tommy and put him down as a first-round draft choice.”
To put Casanova, who was recruited by only three colleges, into the context of LSU football, when fans were asked to vote on a modern-era LSU team, Casanova received more votes than any other Tiger.
There were later accolades. In 2000, the Walter Camp Football Foundation selected Casanova to its All-Century Team.
Still, perhaps Casanova’s greatest accomplishment was combining medical school with his pro career in Cincinnati.
“That was hard,” Casanova said of juggling his time with the Bengals and the University of Cincinnati College of Medicine. “If I had to do it all over again, I’m not sure I would. I’d have to choose one over the other, but I don’t know which one I would pick.”
It was with the Bengals that the legendary coach Paul Brown told Casanova how good a job McClendon was doing at LSU because, despite what Tiger fans thought, he didn’t have enough quality players to work with.
“He was right,” Casanova said. “When I was in the NFL there was Bert Jones and a few others. But just a relatively few.”
That’s what irritates Casanova about today’s Tigers. “We would have loved to have some of those type of guys when I played. We didn’t have a lot, and now they’re everywhere (across the NFL).
“But does LSU have better teams than when I was there?”
“In those days we really left all we had on the field, and we had good teams. We gave the effort, though we didn’t have the talent,” Casanova said. “But Coach Mac convinced we were as good as our opponents and got us to play that way. Don’t know how we did it. Wish I’d see more of the current LSU teams playing up to its ability.”

Marty Mulé is a featured columnist for Tiger Rag.