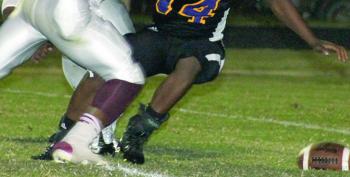 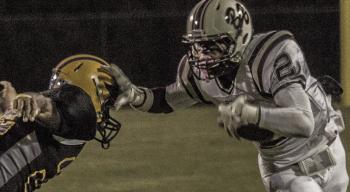 A swarming defense accounted for 16 of Breaux Bridge’s 23 points in a 23-6 District 5-4A victory over parish rival St. Martinville here last Friday.
For the second week in a row the stingy Tiger defense carried the day for The Bridge, notching a safety and returning a blocked field goal and a fumble recovery for touchdowns while limiting a potent SM offense to just 146 yards and one late score.
With the win Breaux Bridge improved to 4-3 overall and 3-1 in district play while The ’Ville slipped to 3-4 and 1-2.

Breaux Bridge’s three big defensive plays came in the final four minutes of the first half after the two teams has battled back and forth without scoring.
Breaux Bridge had threatened early after a short SM punt put them in business at the SM 37. But a procedure penalty slowed the drive and the Tigers turned the ball over on downs at the SM 24.
The home-standing Tigers fought back with runs of 27 and 17 yards by Malik Anthony to advance to the BB 35. But a third down sack of QB Quentin Mitchell ended the threat.
Early in the second period Mitchell got loose for 20 yards and a first down at the BB 30, but the BB defense sacked him on a second down pass attempt, forcing a punt.
Breaux Bridge crossed midfield on a 22-yard Lane Landry-to-Nick Belaire pass but Marquis Domonter coughed the ball up at the 45.
After The ’Ville went three-and-out, Landry found Javeyan Williams open for a 35-yard pickup. But his next pass attempt was picked off at St. Martinville’s one-yard line. After netting zero yards in two plays the Tigers gave up a safety when BB linebacker Lamontre Huval stuffed the SM ball carrier in the end zone for the first points of the game.
Following the ensuing kickoff Breaux Bridge managed one first down just inside SM territory but a Landry pass was intercepted by Jamail Ledet and returned to the BB 20. Three plays produced only 5 yards and SM set up for a 32-yard field goal attempt. But Luke Berard’s kick was blocked by Orel Ledet. Lamontre Huval scooped up the loose ball and raced 77 yards for a touchdown with 1:36 left in the half.
Then on St. Martinville’s first play following the kickoff Mitchell fumbled the ball near the sideline and Corey Abraham got it on a bounce and scooted 35 yards for another BB score to boost The Bridge’s lead to 16-0 at intermission.

Breaux Bridge put together its best drive of the night on its second possession of the third period. Abraham got things going with an 11-yard pickup followed by a 26-yard run. Landry converted a 4th-and-4 with a 23-yard toss to Nick Belaire for a first down at the one and two plays later Marquis Domonter knifed in for the TD that gave Breaux Bridge a commanding 23-0 lead as the final stanza got underway.
St. Martinville got its only score when Breaux Bridge muffed a punt reception at its own 35. After getting sacked for 5 yards, backup QB Jordan Papillion found Ledet open for a 37-yard completion and two plays later Malik Anthony went 3 yards for the TD. The 2-point conversion pass attempt was off the mark and the score stood at 23-6 with 8:46 remaining.
St. Martinville had a chance to close the gap two plays later when Domonter fumbled at his own 36. But Papillion’s first down pass was intercepted by Joseph Williams.
The ’Ville got the ball back one more time deep in its own territory. Mitchell got the Tigers out of the hole with a 21-yard completion to Ledet and a 12-yard toss to Draper Anthony. But a procedure penalty and three straight incompletions killed the possession near midfield as time expired.

BB’s Domonter and Abraham rushed for 48 yards each while Malik Anthony led SM with 45 yards on 16 carries.
St. Martinville travels to Teurlings Catholic this Friday while Breaux Bridge visits Cecilia.