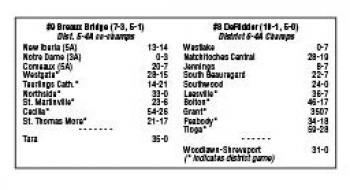 The Breaux Bridge Tigers had little trouble with Tara in the first round of the Class 4A state football playoffs, handing the Trojans a 35-0 shutout at home.

As expected, the road to the Dome gets a little more challenging this week as coach Paul Broussard’s No. 9 Tigers travel to DeRidder to meet the No. 8 seeded Dragons, who finished regular season action with a 9-1 record and the District 3-4A championship.

In their bidistrict game, the Dragons thumped No. 25 Woodlawn of Shreveport 31-0.

The Breaux Bridge defense, which has been outstanding all season long, played perhaps one of its better games last Friday in limiting Tara to only 64 yards total offense.

“Our defensive unit has been playing well all year,” says Broussard. “And they delivered another good performance against Tara.”

And the Tiger offense delivered its second highest point total of the season, using the twin threats of junior running backs Marquis Demonter (17 carries, 80 yards, 1 TD) and Edward Batiste (12-for-90) and the talented arm of senior quarterback Lane Landry. The veteran signal caller completed 10-of-17 passes for 149 yards and four touchdowns to torch the Trojan secondary.

“Lane certainly had a great night,” says Broussard, “and our receivers all did well.”

Demontreal Babineaux led the group of five with four catches for 86 yards and a pair of scores.

The healthy Tigers now turn their attention to a run-oriented DeRidder team. The Dragons lost their first game of the season (to Westlake by 7-0) but improved each week and stormed through their District 3-4A schedule with a 5-0 record, averaging 42 points per game.

“They’re more of a traditional type running team, although when they do throw they’re usually effective,” reports Broussard. “Their offensive line is real good and they’re very solid on defense. They’re definitely a quality, well coached opponent. We’ve got our work cut out for us.”

Advance tickets, priced at $8, are on sale in the BBHS office. Tickets at the game will run $9.

Should the Tigers win Friday, they will play at home on Nov. 29 against the winner of the No. 1 Neville-No. 16 Westgate game.