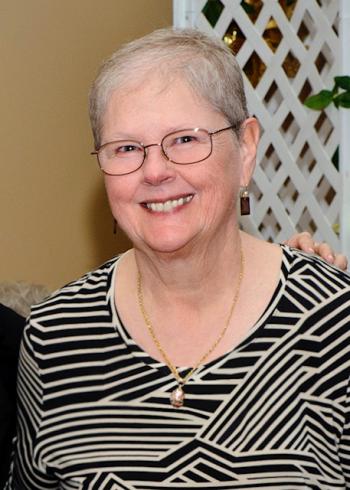 Raceland – Kathleen Kraemer Hebert of Prairieville, LA, left on her trip to heaven from the St. Joseph hospice Carpenter House in Baton Rouge on Saturday, July 29, after a battle with pancreatic cancer.
Funeral arrangements are as follows:
Visitation will be held at Falgout Funeral Home in Raceland on Wednesday, August 2, 2017, from 5 p.m. until 9 p.m. and will continue at St. Mary’s Nativity Catholic Church on Thursday, August 3, from 9 a.m. until service time. Mass of Christian burial will be held at the church starting at 11 a.m. with burial to follow in the church cemetery.
“Kathy” Hebert was born March 18, 1949, in Raceland, LA to Walter Kraemer and Irene Prestenbach Kraemer. She was preceded in death by her parents and brothers, Murphy and Danny.
She is survived by her brothers, Irvin, Wilbert, Donald and Kevin as well as her only sister, Mary Kraemer Folse.
She married her next door neighbor, John Adam Hebert Jr. on June 10, 1967. They were blessed with two sons, John Adam Hebert III of Baton Rouge and Scott Michael Hebert of Portland, Ore. She has three grandsons, all from John III – John Adam Hebert IV, Connor Reese Hebert and Noah Riley Hebert.
Kathy Hebert was in the first graduating class of Central Lafourche High School which recently celebrated their 50 year reunion for which she was instrumental in organizing. Kathy and John reached their Golden Anniversary of 50 years this year. After rearing her two sons to school age she attended LSU in Baton Rouge. Kathy graduated from LSU with a degree in accounting. She held auditing positions at the La. Department of Revenue. She later became Business Manager for the Ascension Parish School System from which she retired.
She was an avid fan of LSU football and baseball but her best times were spent attending youth baseball games of her sons and grandsons. Along with her husband John she became an active member of the Hebert Family Association for which she served as genealogist. Kathy and John traveled to the lands of their Acadian/Cajun ancestors in such places as Canada (Nova Scotia, Prince Edward Island, and New Brunswick), Maine and France where she met numerous cousins and very dear friends. She loved to take pictures of flowers of which she has a collection of thousands of photographs taken both locally and while on their travels.
The personnel at Carpenter House kept her comfortable and special thanks to Catherine, Trygve, Jennifer, Karen, Vicky, Bob, Teri, Terence, Mary, Regina, Becky, Robin, Shelly, Fay, Margaret, Nicole, Crystal, Renee, Willie, Brenda and Dr. Guillory as well to those we failed to list. Special thanks to Dr. Derrick Spell of Mary Bird Perkins for helping her battle three primary cancers over an eight year period.
Falgout Funeral Home is entrusted with arrangements, 985-537-5261.