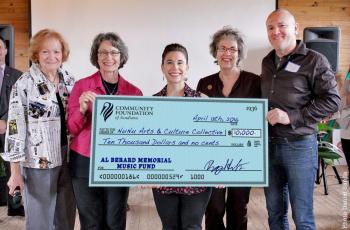 The Al Berard Memorial Music Fund, operating through the Community Foundation of Acadiana (CFA), recently granted $10,000 to NUNU Arts and Culture Collective for “French Week” to support ongoing and future French programming through the Semaine Française France-Louisiane Fund.
The grant will be used, in part, to support the annual Semaine Française d’Arnaudville Creative Placemaking Summits which include the Le Feu et l’Eau Rural Arts Celebration; further develop the Music of Acadiana Music Series and La Pataterie; support French immersion classes through the Jacques Arnaud French Studies Collective; and work in tandem with the future Saint Luc French Immersion and Cultural Campus.
“Al Berard was all about the furthering of Louisiana French culture,” said NUNU Arts and Culture Collective Communications Director Jacqueline Cochran. “He was generous with his love of music as evident by the many he taught and mentored. That the fund honoring his memory chose NUNU Arts and Culture Collective is a testament to the collective’s ongoing work. NUNU most sincerely thanks the Berard family and the Al Berard Memorial Fund.”
NUNU Arts and Culture Collective is a 501(c)(3) nonprofit arts organization dedicated to providing a stage, platform and gallery for creative living by facilitating community, economic, and artistic and cultural development.
Funds for the grant were raised from the Al Berard Music Festival which was held last November at the Henry Guidry Memorial Park in Henderson, LA. Daughter of Al Berard and fund owner Laura Huval said, “We visited NUNU recently and were very inspired with the efforts to preserve our culture, language and music. NUNU is also collaborating with other countries and exposing our culture to the world. Sharing, learning and teaching were very important to my father so this grant to support NUNU’s work is important to us.”
The Al Berard Memorial Music Fund promotes Acadiana’s unique musical culture by providing instruments, master teachers and music scholarships to students of all ages. The fund honors the life of the late Cajun musician, Al Berard, who was a pillar of his community and a mentor for music lovers everywhere. His passion was to teach everyone he met about his love for music and for the Cajun/Creole culture.
The Al Berard Memorial Music Fund was established by the Berard Family to honor Al Berard’s legacy. All gifts to the fund are tax-deductible. Please make checks payable to Community Foundation of Acadiana with “Al Berard Memorial Fund” in the memo and mail to 1035 Camellia Blvd., Ste. 100, Lafayette, LA 70508. For more information about the Al Berard Memorial Music Fund, please visit www.alberard.com.
Community Foundation of Acadiana’s (CFA) core purpose is to connect all generous people to the causes they care about. CFA is south Louisiana’s premier philanthropic organization benefiting our region, with a particular focus on the parishes of Acadia, Evangeline, Iberia, Lafayette, St. Landry, St. Mary, St. Martin and Vermilion. CFA has realized cumulative gifts exceeding $166 million and has made cumulative grants of over $82 million. Learn more at www.cfacadiana.org.