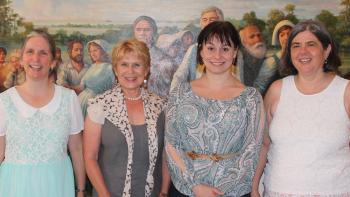 FOUNDATION OFFICIALS – Among the individuals who have worked to support the Acadian Memorial over the years on hand for last week’s 20th anniversary of the opening of the facility were (from left) Jolene Adam, founding curator/director; past board president Marty Guidry, Michelle Verret Johnson, curator/director 2011-14; current curator/director Elaine Clément, board member Mavis Frugé, past president Randy Ménard, Janie Bulliard, founding board member; and board members Lynn Bonin, Tracy Frederick, Renée Richard and Christy Maraist. (Henri C. Bienvenu)

REFUGEES LISTED – Bronze plaques with the names of more than 3,000 Acadian refugees cover one was of the Memorial. (Henri C. Bienvenu)

Members of the Acadian Memorial Foundation marked the 20th anniversary of the opening of the Acadian Memorial during their annual membership meeting held June 18.
Although the facility was actually opened on April 29, 1996, the Foundation members also noted a number of other milestones connected with the Acadian Memorial, going all the way back to 1989 when the city administration dedicated the old city hall building as the Memorial site.
Under the leadership of Jane Bulliard and the late Patricia Resweber the Memorial developed its mission to memorialize and document the individuals of the Acadian Exile who came to Louisiana in the mid-18th century, found refuge and established a new life and a distinct culture.
The main features of the Memorial include a mural depicting approximately 40 figures representing actual Acadian refugees in the time period in which they arrived in Louisiana; a wall of names identifying more than 3,000 individuals who cane be documented as Acadian refugees in Louisiana records; an eternal flame burning in memory; an eternal flame burning in memory of the exiles; and an archive for collecting and disseminating factual information about the individuals.
In 1990 some 22 Acadiana parishes signed resolutions supporting the Memorial project and the next year the Louisiana Legislature declared St. Martinville the hoe of the “World Memorial to All Acadian Refugees Who ended Their Exile in Louisiana.”
Robert Dafford was commissioned in 1992 to paint the Memorial’s mural. His fee of $35,000 was covered by grants from the Louisiana Division of Arts and the Acadiana Arts Council along with individual donations and sponsors. The following year city officials travelled to Nantes, France to twin with the Dafford mural Embarquement des Acadiens in that city.
The mural – The Arrival of the Acadians in Louisiana – was unveiled to the public on Oct. 28, 1995. Gov. Kathleen Babineaux Blanco was on hand to light the Eternal Flame during ceremonies held on Dec. 10.
The Wall of Names and the multimedia center were unveiled on May 31, 1998.
Other Memorial highlights over the years included:
•Ensemble Encore, Together Again genealogy database went online in 1999.
*August 2001 – Cultural Heritage Center opened the Museum of the Acadian Memorial.
•June 2003 – Deportation Cross, a replica of the Grand-Pre cross, dedicated in the Memorial Garden along with mosaic coat of arms.
•2004 – “Let the Children Speak” wins the History Channel’s “Save Our History” national grant contest, garnering a $10,000 prize along with a $10,000 grant awarded by Lowe’s Inc. to fund the mural audio track.
•March 2005 – The first Acadian Memorial Festival held (third Saturday in March).
•2006 – L’Ordre du Bon Temps fundraiser established by the Foundation.