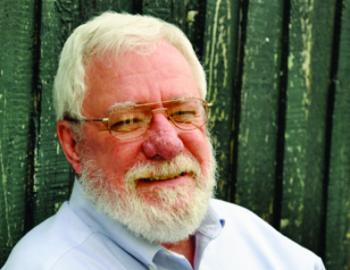 When the spirits moved railroad builder Arthur Edward Stilwell, they also moved a lot of freight. He extended the Kansas City Southern Line into Louisiana after he heard voices in his head.
At least that’s the railroad lore.
Patricia Duncan of the Louisiana Division of Historic Preservation looked into his story some years ago and reported, “Stilwell was a colorful New York native who had transportation in his blood.” He was the grandson of Hamblin Stilwell, one of the builders of the Erie Canal. Arthur was also an active organizer of the Western Union Telegraph System and the New York Central Railroad, and was a friend of Commodore William Vanderbilt. He learned his love of railroading from the stories told by these two men.
“Stilwell built over 2,300 miles of railroad line, founded at least 40 communities of differing sizes, and organized 41 companies. He also authored books, plays, and music.”
He was apparently a first‑rate businessman, but he also claimed that all of his life he’d received messages from the spirit world, and that much of his success came from acting upon those messages. In fact, he claimed the spirits were instrumental in his decision to extend his line through western Louisiana.
By the time the voices told him to turn south, Stilwell’s Kansas City, Nevada & Gulf Railway had reached Joplin, Mo., and he’d begun inching toward the Gulf from there. By 1893, apparently without the aid of the spirit world, he’d extended the line into Arkansas.
But that year financial panic swept across the nation pushing over‑extended rail lines into bankruptcy, and railroad builders, even psychic ones, found bankers and other lenders unfriendly to expansion plans.
That’s when the voices told Arthur to go to Holland to find the money he needed.
“Once in Holland,” Duncan relates, “he rekindled an acquaintance with Jan DeGoeijen, a coffee merchant ... he met during a … European vacation. Various stories survive relating how Stilwell engineered this reunion, but the outcome was that DeGoeijen became an agent for Stilwell’s company and soon succeeded in selling $3 million worth of railroad stock to his countrymen.”
Stilwell used that money to extend his track to Shreveport, and intended to branch from there toward Houston and Galveston. But the spirits said not to do that. He told his investors that he “must not make Galveston the terminus of his railroad because the city would someday be destroyed by a tidal wave.”
Less than a decade later, the Hurricane of 1900 pushed a huge wave across Galveston island destroying practically everything there, which did not include his railroad.
As the voices instructed, Stilwell sent his track into western Louisiana, through Caddo, DeSoto, Sabine, Vernon, Beauregard, and Calcasieu parishes, crossing the Sabine west of Vinton, then heading south to Sabine Pass, where he intended for his freight cars to meet Gulf of Mexico steamers.
By 1897, he was almost there, and was already making good money on his investment. As he pushed south, his line opened the pine forests of western Louisiana to lumbermen who made huge fortunes for themselves and handsome profits for Stilwell. It is literally true that his railroad changed the face of western Louisiana.
As Duncan reports, “Settlement patterns changed as people moved their homes from area rivers to the railroad lines and Stilwell’s company founded and promoted new towns and villages to support its depots.” The developer named some of these communities after his European investors, which explains why we find names like Zwolle, DeRidder, and DeQuincy in southwest Louisiana.
Once he’d honored his investors and pushed his line across the Sabine and into Texas, Arthur Stilwell decided to name a town on his new rail line after himself. He’d already used his last name when he founded Stillwell in Oklahoma, so he used his first name this time.
That’s why transplanted Cajuns who call themselves Hee-bert and Sigh-mon and Tray-han live in a place called Port Arthur.