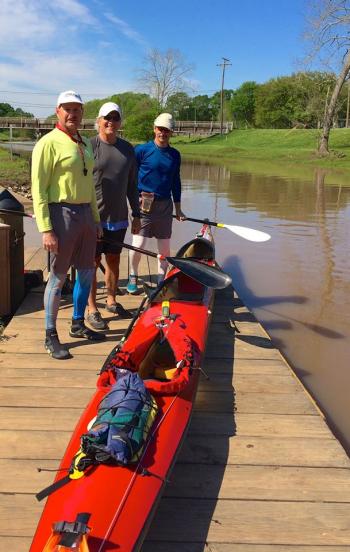 TOP TOP OF THE TECHE paddlers (from left) Brad Rex, Jimmy Guidry and Randy Hargroder, shown here before the 7.7-mile race down Bayou Teche from Leonville to Arnaudville.(Denise D’Abundo)

Three-man boats dominated last Saturday’s Top of the Teche, a 7.7-mile race for paddlers on Bayou Teche from Leonville to Arnaudville.
A trio of veteran solo paddlers teamed up to take first place. Team “River Racers,” Brad Rex, Jimmy Guidry, both of Lafayette, and Randy Hargroder of Opelousas, did the course in 53 minutes, 20 seconds.
“Team Pont Breaux,” teenage triplets Carson, Payton and Conrad Pellerin, who have been paddling multiman boats for several years, came in just three minutes and change being the leaders for a strong second place. Their time was 56 minutes, 38 seconds.
Both teams broke the TOT record set by solo paddler Elmore Holmes of Memphis, Tenn., in 2015 with a time of 57 minutes, 46 seconds.
There were 21 teams in this season opener for Tour du Teche races. Here’s how the remaining field did:

The competition is for trophies and certificates. Entry of $30 per paddler includes a T-shirt and lunch at Myran’s Maison de Manger in Arnaudville.
Proceeds from the race benefit the Arnaudville Chamber of Commerce and the Leonville Volunteer Fire Department.
The race is one of a dozen staged by Tour du Teche and the first one of the 2016 season.
For more information see www.tourduteche.com.