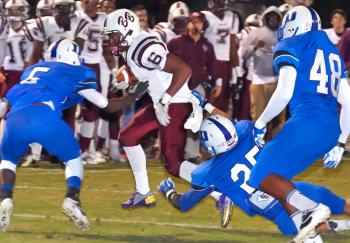 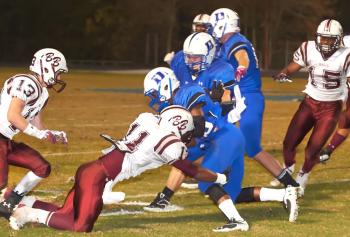 The opportunistic DeRidder Dragons turned three Breaux Bridge turnovers into 14 points on their way to a 24-0 Class 4A regional victory here last Friday.

The loss ended The Bridge’s playoff run while the Dragons advance to a quarterfinal game against No. 1 seeded Neville.

Senior quarterback Lane Landry, who had thrown only five interceptions through 10 games, was picked off twice by a pressing DeRidder defense and the Dragons turned one steal into a touchdown.

Another score came after DeRidder recovered a Lamontre Huval fumble at the BB 15 for another TD.

The Tigers could never get their running game going and finished with only 42 net yards rushing. Although Edward Batiste picked up 64 yards on eight carries, Landry was sacked several times to partially negate the gains.

The Dragons relied almost entirely on their ground game, with quarterback Tyler Herring putting the ball up only twice without a completion.

Leading DeRidder was D’Angelo Reder with 95 yards and a TD while Drew Victor added 55 yards and a pair of scores.

The Dragons got the ball first and used up almost half of the opening period in driving to the Breaux Bridge 30. But on 4th-and-7 the Tiger defense stuffed Reder for a loss to end the threat.

After the two teams exchanged punts the Dragons got their first interception when Landry went to the air at his own 18. DeRidder needed only three plays to reach the end zone, with Victor taking it in from the 3.

Breaux Bridge nearly managed to knot the score late in the half when Demontreal Babineaux took a pass from Landry 41 yards to the Dragon 17. A 9-yard run by Orel Ledet gave the Tigers a first down at the one, but time ran out before the Tigers could punch it in and DeRidder held a 7-0 lead at intermission.

The second half started badly for the Tigers when Huval fumbled on the second play from scrimmage and DeRidder got the ball at the BB 15. Three plays later Reder went 14 yards for the score barely two minutes into the third period.

Things turned really sour for the visiting Tigers when Landry suffered his second pick on the first play following the ensuing kickoff.

This time DeRidder took over at its own 42 but the BB defense rose to the challenge, forcing the Dragons to go 3-and-out.

Breaux Bridge picked up two quick first downs on runs of 24 and 15 yards by Batiste but stalled near midfield and had to punt.

The Dragons then put together their best drive of the game, going 74 yards in 10 plays for a TD on the first play of the final stanza, pretty much putting the game out of reach at 21-0.

DeRidder added a late field goal after sacking Landry for an 11-yard loss on a 4th-and-5 play near midfield to seal the victory.

Breaux Bridge ended its season with a 7-4 record while DeRidder improved to 11-1.