SM running back Malik Anthony (14) Is caught from behind as he tries to cut behind Tiger center Lawrence Courville (52) and Justin Picard (12). Trailing 28-7 at intermission, St. Martinville struck for three second half touchdowns but couldn’t overcome Teurlings Catholic in a 35-28 loss.(Henri C. Bienvenu) 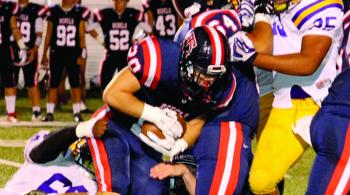 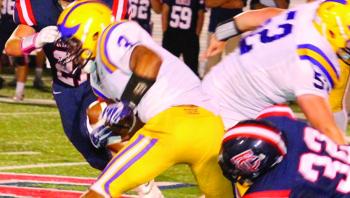 SM’s JAMAIL LEDET (3) shakes off a Teurlings defender as he gets past a block by center Lawrence Courville (52). Ledet rushed for 116 yards and also caught three pases for 64 yards and a touchdeown but the Tigers fell short in a 35-28 loss to the Rebels.
(Henri C. Bienvenu) 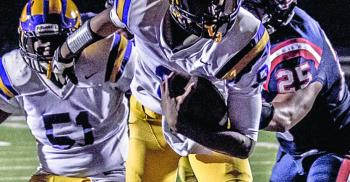 SM’s Quentin Mitchell bursts past a Teurlings defender into the end zone for a touchdown last Friday. Helping to clear the way was Peter James (51). The senior quarterback accounted for all four of The ’Ville’s scores, rushing for two TDs and throwing for two others.(Kalyb Boudreaux)

Down 28-7 at intermission, the St. Martinville Tigers staged a furious second half rally, outscoring Teurlings Catholic 21-7 only to fall short in a 35-28 loss to the Rebels here last Friday.
Senior quarterback Quentin Mitchell sparked the hurry-up Tiger offense, rushing for 115 yards and 2 touchdowns while completing 9-of-14 pass attempts for 149 yards and 2 more TDs.
But ironically, it was a pair of errant passes that helped seal The ’Ville’s loss. On the second play of the third quarter Rebel Brandon Batiste picked off a tipped Mitchell pass and returned it 31 yards for a touchdown. And late in the game when the Tigers were driving for what might have been a game-tying touchdown, Mitchell was intercepted by Nick Gary inside the Rebel 20 with just 2:12 to play.
The Tiger offense had the pedal to the metal in the second half, reeling off 44 plays while SM defenders limited Teurlings to only 20 snaps without a score.
But the loss dropped St. Martinville to 3-5 overall and 1-3 in District 5-4A play while the Rebels improved to 4-3, 3-1.

After fumbling at the SM 16 on their first possession, the Rebels scored their next four drives of the first half to dominate play.
Zach Lafleur capped the next drive with a 10-yard TD and the third with a 32-yard scamper on the first play of the second stanza. After a short SM punt, Teurlings went 52 yards in 9 plays for the game’s third TD, a 3-yard keeper by QB Brye Latiolais midway through the period.
The Tigers finally got on the board a couple of minutes later when Mitchell found an open Jamail Ledet for a 47-yard TD strike.
But it took the Rebels less than a minute to answer, after a short kickoff put Teurlings in business at its 43. Three plays later Cole Kelley hit Jake Gremillion with a 17-yard TD pass to stretch the Rebel lead to 28-7 at the 3:14 mark.
The Tigers roared back with 18-yard runs by Malik Anthony and Ledet followed by a 16-yard ramble by Mitchell for a first down at the Rebel 9. But on 4th-and-goal from the 2 and no time on the clock Jordan Papillion was stopped at the 1 by the stout Rebel defense.

St. Martinville had first possession in the second half and opened with a 16-yard gain by Ledet. But then Mitchell’s deflected pass was intercepted by Batiste for a Rebel touchdown that made the score 35-7.
The Tigers wouldn’t quit, however, and put together a 9-play, 80-yard drive highlighted by a 34-yard Mitchell-to-Devante Simon pass. Mitchell finished it off with a 2-yard keeper with 8:29 to play in the 3rd period.
The Tiger defense force a 3-and-out and SM got the ball back at its 11. A 16-play drive drained 5½ minutes off the clock and ended when Mitchell connecting with Collin Guidry for a 12-yard TD late in the quarter, cutting the Rebel lead to 35-21.
St. Martinville got the ball back at its 40 early in the final stanza. After moving into Rebel territory, Mitchell broke a 30-yard run on a 4th-and-2 situation for a first down at the TC 12. Four plays later he slipped into the end zone from 2 yards out and Luke Berard’s kick made the score 35-28 with 7:08 left in the game.
Teurlings’ next possession sputtered at midfield and The ’Ville took over at its 20 with 5:03 remaining. The drive opened with a 29-yard Mitchell-to-Justin Picard pass and advanced to the TC 38. But two running plays netted zero yards and on 3rd-and-10 Mitchell lofted a long pass that was a bit off the mark and was intercepted to kill the threat.
The Rebels were able to run out the remaining 2 minutes and preserve their 35-28 homecoming victory.
With Anthony slowed by a sore ankle, Ledet shouldered more of the load and finished with 116 yards on 24 carries along with three pass receptions for 64 yards and a touchdown.
Anthony still managed 73 yards on 16 totes.
Lafleur led the Rebels with 124 yards and two touchdowns rushing plus four catches for 18 yards.
St. Martinville returns home this Friday to host the undefeated St. Thomas More Cougars.