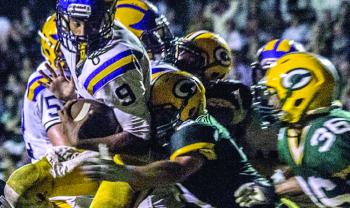 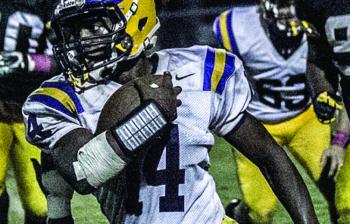 The two halves of last Friday’s intraparish showdown between Cecilia and St. Martinville were like two different games. The homestanding Bulldogs roared to a 28-7 halftime lead, piling up more than 200 rushing yards on the legs of Raymond Calais and Damon Patt.
But the visiting Tigers regrouped during intermission and turned things around in the second half, striking for four unanswered touchdowns while piling up 270 yards total offense and limiting Cecilia to less than 70 on their way to a 35-28 District 5-4A victory.
St. Martinville’s often porous defense seemed to be picking up where it left off the previous week against Kaplan where it allowed the Pirates to roll up 371 rushing yards. Cecilia scored on 4 of its 7 first half possessions as Bulldogs speedster Raymond Calais and battering ram Damon Patt shredded the SM defense. Patt banged in for touchdowns of 5, 6 and 4 yards while Calais broke a 73-yard TD gallop just 11 seconds before intermission.
Patt’s third TD came after the Bulldogs recovered a SM fumble at the Tiger 4 midway through the second period.
After spotting Cecilia a 14-0 lead, St. Martinville struck for its lone first half touchdown when QB Quentin Mitchell capped a 43-yard drive with a 17-yard TD run. Jamail Ledet had returned a Cecilia kickoff 45 yards to the Bulldog 43 to give his Tigers excellent field position.

If Cecilia’s homecoming crowd thought their Bulldogs had all the momentum after Calais’s big touchdown just before halftime, they were badly mistaken.
The Tigers came out for the second half breathing fire.
Cecilia got the ball first in the third quarter but managed just one first down before being forced to punt.
Eleven plays later Malik Anthony scored from 6 yards out and Luke Berard’s PAT kick closed the gap to 28-14 midway through the period.
The ’Dogs went 3-and-out on their next possession and The ’Ville answered with a 10-play, 78-yard drive that saw Mitchell complete passes of 24 and 17 yards and then run the final 21 yards for the second of his three rushing TDs to trim the Cecilia lead to 28-21.
St. Martinville opened the third quarter with another 10-play drive, this one covering 66 yards. Mitchell connected on 3-of-4 pass attempts on the drive, including a 28-yard TD strike to Draper Anthony to knot the score at 28-all.
Cecilia just couldn’t get its offense going against a pumped-up Tiger defense and St. Martinville got the ball back after an exchange of punts with just under 3 minutes left in the game. Jamail Ledet opened the possession with a 17-yard ramble and two plays later Malik Anthony went 13 yards for a first down at the CHS 28. Williams kept the ball on the next three plays, gaining 14, 3 and the final 11 yards to notch the go ahead-TD with just 41 seconds on the clock.
Cecilia’s desperate attempt to turn the tide ended when SM’s Ledet picked off Landon Roberts’ 4th down pass in the Tiger end zone on the final play of the game.
Bulldog Calais would finish with 172 yards on 13 carries while Patt added 56 yards and three TDs on 15 totes.
Mitchell led the Tigers with 104 yards and 3 rushing touchdowns while also completing 15-of-32 passes for 144 yards and a fourth TD. Malik Anthony added a workhorse 91 yards and a TD on 16 carries.
The win improved The ’Ville’s record to 3-3 overall and 1-1 in 5-4A play while Cecilia slipped to 1-4, 0-3.