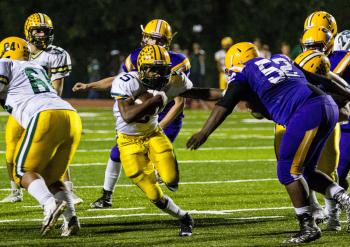 LOOKING FOR DAYLIGHT — Cecilia’s Raymond Calais Jr. cuts away from SM defender Ty Nelson (52) behind a block by Bulldog Dreylan Duffy (left). Calais rushed for three TDs and 165 yards in the first half of last week’s regular season finale to help power the Bulldogs to a convincing 44-0 victory over The ’Ville. (Kalyb Boudreaux) 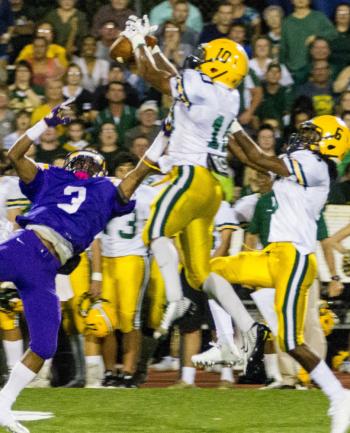 INTERCEPTION – Cecilia defensive back Keldrick Zeno (10) goes high over SM receiver Deantre James to intercept a Jared Davis pass as Bulldog Tarik Davis (6) provides back up. The Bulldog defense claimed two interceptions and three fumble recoveries, scoring touchdowns on two of the turnovers on the way to a 44-0 shutout victory.(Kalyb Boudreaux) 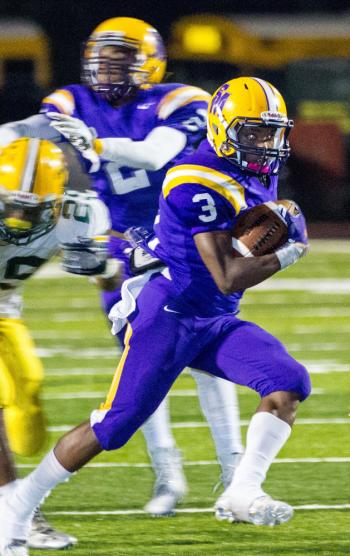 Deantre James breaks loose on a 73-yard kickoff return during the first half of last Friday’s game against Cecilia. James, a junior, was one of the few brights spots for St. Martinville in a loss to the Bulldogs.(Kalyb Boudreaux)

St. Martinville wasted a golden scoring opportunity in the first minute of last Friday’s District 5-4A showdown with Cecilia and never came close again as the Bulldogs rolled to a 44-0 victory in a dominating performance.
The victory boosted Cecilia (9-1, 4-0) to the District 5-4A championship and to bragging rights in St. Martin Parish while the Tigers had to settle for second place in league play with a 6-4, 3-1 worksheet.
The Bulldogs scored all of their points in the first half, striking in almost every way possible including long runs by Raymond Calais Jr., who finished with three touchdowns, a Landon Roberts-to-Kenya Dartez pass, the return of a fumble, a pick-six steal and a safety.
The Tiger offense misfired all night before a hustling Cecilia defense, giving up five turnovers on two interceptions and seven fumbles while drawing 10 penalties, several of which negated big plays.
St. Martinville struggled even against Cecilia reserves, getting off only 17 plays that netted a minus 10 yards in the entire second half.
Calais, who sat out the second half, scored on runs of 23, 42 and 44 yards, finishing with 165 yards on just 11 carries.
Cecilia didn’t need to use its equally potent air attack much, with Roberts putting the ball up only seven times, completing four for 40 yards and a short TD to Dartez.

Cecilia muffed the opening kickoff and St. Martinville recovered the ball at the Bulldog 34. But quarterback Jared Davis fumbled on 4th-and-2 and the ’Dogs took over at the 27.
Dartez went to work, ripping off a 38-yard run and four plays later split the center of the Tiger defense for a 23-yard touchdown. Tanner Olivier booted the first of his six point-afters and the Bulldogs were off to the races.
Cecilia got the ball right back when Kendrick Zeno picked off a Davis pass and it took the Bulldogs just three plays to go 70 yards, with Calais getting the final 42 for his second TD.
Trailing 14-0 the Tigers appeared ready to rally after Deantre James returned the ensuing kickoff 73 yards to the CHS 4. But a personal foul penalty pushed SM back to the 19. After three incomplete passes James turned a 4th-and-15 into a 22-yard pickup to the Bulldogs 15. James picked up another 7 yards but a procedure penalty slowed the drive and Davis was sacked for a big loss on 4th down.
On the first play of the second period Davis coughed up the ball after a big hit and Bulldog Chris Lewis scooped it up and raced 47 yards to pay dirt, stretching the Cecilia lead to 21-0.
St. Martinville mishandled the ensuing kickoff and was forced to start its next possession inside the 10. A short punt set Cecilia up at the SM 33 and five plays later Roberts hit Dartez for ta 5-yard TD.
And it just kept getting worse for the Tigers.
After picking up a big first down on a Davis-to-James pass that covered 33 yards, Davis went to the air again only to have his toss picked off by Ryan Malbrough who took it 47 yards for yet another Cecilia TD that put the Bulldogs up 35-0 midway into the second period.
Another deep kickoff set the Tigers back at their 7 and on the first snap Davis mishandled the ball which bounced out of the end zone for a safety.
Forced to kick from their 20 following the safety and drawing a major penalty on the return, St. Martinville found the Bulldogs inside their territory once again. On the second play Calais ripped off a 44-yard TD run and Cecilia had its 44-0 advantage with almost six minutes still to play in the first half.
James came through with an exciting 69-yard run all the way to the CHS five. But a holding penalty cut the gain to 23 yards and moved the ball back to midfield.
St. Martinville got the ball first in the second half but opened with an 8-yard sack of Davis and had to punt.
Coach Terry Martin started sending in the Bulldog reserves and the game settled into a defensive standoff with neither team able to score.