The Bridge socks it to STM 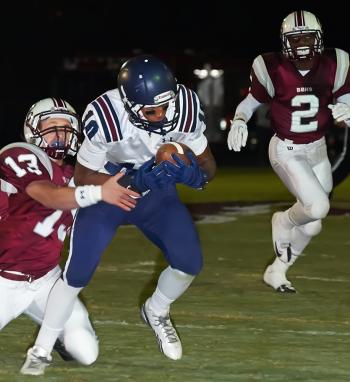 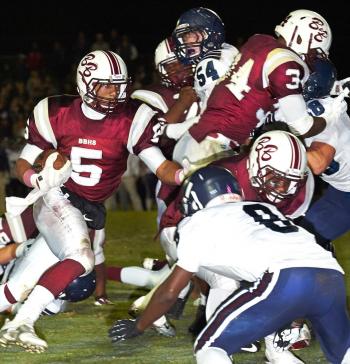 Playing before a revved up hometown crowd, the Breaux Bridge Tigers pulled off a 21-17 upset of the previously undefeated St. Thomas More Cougars here last Friday.
The win earned the 6-3, 5-1 Tigers a 3-way share of the District 5-4A championship along with the 9-1, 5-1 Cougars and Teurlings Catholic (6-3, 5-1), which finished its season with a 44-14 win over Northside.
Senior quarterback Lane Landry connected with senior tight end Demontreal Babineaux for the 31-yard touchdown with just 24 seconds on the clock to secure the victory.
Landry had a career game, completing 13-of-21 passes for 107 yards and two touchdowns without an interception.
And the stingy Tiger defense turned in a stellar effort, holding the Cougars to their second lowest point total of the season. Senior defensive back Gavin Thibodeaux claimed two second quarter interceptions that helped set up a pair of BB touchdowns.

It was the second time in three years that the Tigers derailed STM’s bid for a perfect season. In the 8th game of the 2011 season Breaux Bridge topped the Cougars 28-14 and both teams finished 9-1 and tied for the league title.

Beaux Bridge got off to a shaky start when Edward Batiste fumbled at the STM 32 on The Bridge’s first possession. But the Tiger defense forced a punt and Landry got his team moving with a 52-yard completion to Javeyan Williams. But Landry’s 4th down pass at the STM 16 was incomplete and the Tigers came up empty.

The defensive stand seemed to energize the Cougars and they responded with a 14-play, 84-yard scoring drive. QB Williams Bellamy connected with Kendall Johnson for the 36-yard touchdown on the final play of the first quarter to put STM up 7-0.

The Tigers seemed ready to answer when Joseph Williams returned the ensuing kickoff 42 yards to midfield. But Landry fumbled and STM took over at the BB 47.

Three plays later Thibodeaux got his first pick and returned it 48 yards to the STM 25. Lamontre Huval got the touchdown on a 4-yard run but the PAT kick was wide and the Cougars retained a slim 7-6 lead.

Minutes later Thibodeaux came through again for the Tigers with his second interception and returned the pick all the way to the Cougar 12. It took the Tigers just three plays to capitalize on the break with Landry hitting Javeyan Williams for the 8-yard TD. Joseph Williams ran for the 2-point conversion that put BB into a 14-7 lead with 3:50 remaining in the second quarter.

The Tigers moved into Cougar territory one more time with the help of an interference penalty. But the possession ended at the STM 30 when Landry was stopped 4 yards short on an attempted 4th down conversion just before intermission.

The Cougars came out of the halftime break reinvigorated and used up almost half of the third period on a 16-play drive that resulted in a 1-yard TD run by Justin Suire. The PAT kick knotted the score at 14-all.

Breaux Bridge responded by advancing all the way to the STM 30 before a costly penalty halted the drive.

A punt pinned the Cougars back to their 9, but Bellamy hit Connor Broussard for a 28-yard pickup. STM reeled off three more first downs, advancing all the way to the BB 9 before the Tiger defense stiffened and the Cougars had to settle for a 24-yard field goal that put them up 17-14.

After an exchange of punts, the Tigers got the ball back at their 24 with just 2:15 showing on the clock. Landry went to work and connected with Nick Belaire for 18 yards and Joseph Williams for 22 more. With a first down at the 31 he found Babineaux open along the sideline. Babineaux did a good job of eluding two Cougar defenders and took it in for the winning score as the Tiger crowd went wild.

Javeyan Williams picked off a desparate Bellamy pass on the final play of the game to seal the Breaux Bridge victory.

Landry spread his 13 completions around to five different receivers. Babineaux had 3 catches for 41 yards followed by Nick Belaire with 3 for 41 and Javeyan Williams with 2 for 69 yards.