BB’s Edward Batiste goes down on a hard tackle by Cecilia defensive lineman Chris Broussard last Friday as Bulldog Keldrick Zeno (23) and Tiger Cody Broussard (52) look on. Batiste rushed for 127 yards and two touchdons as The Bridge rolled to a 54-26 victory.(Ted Uhall) 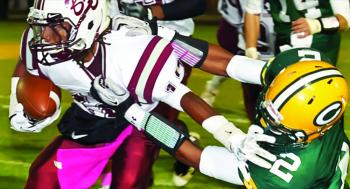 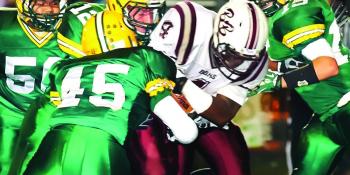 BB’s MARQUIS DOMONTER protects the ball as he is wrapped up by Cecilia linebacker Kyler Johnson (45). Also in on the stop are Cullen Hamilton (12) and Skylar Johnson (15).(Ted Uhall)

Cecilia – Breaux Bridge finally got its offense untracked last week, rolling to a 54-26 victory over District 5-4A rival Cecilia that kept the parish championship trophy in The Bridge for another year.
The Tigers had averaged less than 14 points per outing on offense over the first seven games of the season, but with Edward Batiste and Corey Abraham each rushing for more than 100 yards and QB Lane Landry connecting on 8-of-12 passes for 139 stripes, the Tigers rolled up almost 500 yards total offense while scoring eight touchdowns.
The usually stingy Tiger defense, which had yielded less than 200 yards per game and accounted for five touchdowns over seven contests, gave up 356 yards to a spirited Cecilia offense but did come up with two key turnovers.
Breaux Bridge improved to 5-3 overall and 4-1 in league play while Cecilia dropped to 1-7 and 0-5.

The Tigers got cranking early with Abraham breaking a 53-yard run to the Cecilia 13 on the game’s second play. But QB Lane Landry was sacked twice for losses of 15 and 10 yards and The Bridge turned the ball over on downs at the 31.
Breaux Bridge got the ball right back when Landon Roberts’ first pass attempt was intercepted by Marquis Domonter and returned to the 26. Six plays later Lamontre Huval got the first of his two touchdowns on a 2-yard run midway through the first period.
Late in the quarter Cecilia drove to the BB 19 before being stopped by the Tiger defense.
The Bridge opened the second period with a 47-yard Landry-to-Nick Belaire pass. Three plays later Huval scored from the 20 to give BB a two touchdown lead.
Cecilia responded with an electrifying 73-yard touchdown by Damon Patt to close the gap to 13-6.
Huval then returned the ensuing kickoff 56 yards to the Bulldog 30 and Domonter went 3 yards for the TD midway through the period.
Breaux Bridge added another score on its next possession, going 52 yards in six plays. Landry snuck it in from the 2 and Michael Vincent’s PAT kick made it 27-6 at the 2:19 mark.
The Bulldogs battled back with Roberts connecting with Damien Bernard for 33 yards to the BB 35. Four plays later, with just 55 seconds left in the half, he found Bernard open again for a 25-yard touchdown. The blocked PAT kick left the halftime score at 27-12.

The Bulldogs opened the third quarter with a quick scoring drive that began with a 34-yard run by Raymond Calais. The speedy sophomore finished the drive with a 17-yard touchdown and Tyler Doucet’s PAT kick trimmed the Breaux Bridge lead to 27-19.
Breaux Bridge struck again after a 43-yard punt return by Joseph Williams set the Tigers up at the CHS 35. Landry went to the air and hit Demontreal Babineaux for the 35-yard TD halfway through the third quarter.
The Tigers added to their total on the next possession when Williams broke a 40-yard touchdown run.
The never-say-die Bulldogs fought back, advancing to the BB 18 on nice runs by Skyler Hebert and Landon Roberts. But the drive ended when Roberts was intercepted at the 20.
Breaux Bridge used the turnover to move 80 yards in just seven plays for yet another TD. The score came on a 1-yard plunge by Batiste, who opened the drive with a 31-yard run, and boosted the BB lead to 48-19 early in the final stanza.
Cecilia still wouldn’t quit and Landon Roberts got the ’Dogs moving with a 40-yard toss to Farrell Roberts. Three plays later Patt picked up his second TD from 5 yards out.
The Tigers wrapped up the scoring late in the game on a 3-yard run by Batiste, who finished with 127 yards on 14 carries.
Patt led the Bulldogs with 117 yards and two touchdowns while sophomore QB Landon Roberts connected on 11-of-20 passes for 144 yards and a TD. Damien Bernard led Cecilia receivers with 5 catches for 69 yards.
Cecilia travels to Northside Friday while Breaux Bridge has an open date.