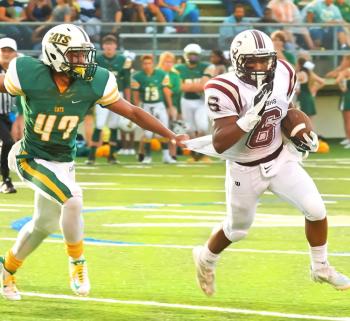 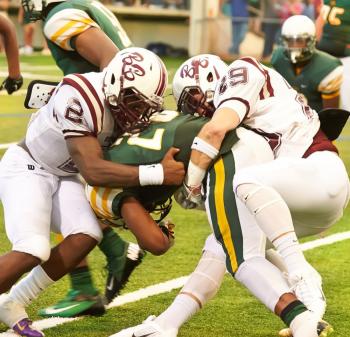 BB DEFENDERS Joseph Williams (2) and Chris Broussard wrap up a Livonia ball carrier. Williams, who had two interceptions in leading a stout Tiger defense that shut out the Wildcats, was named the game’s MVP.
(Ted Uhall) 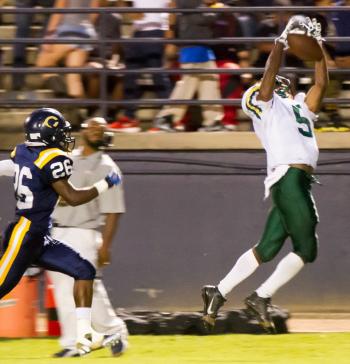 NOT QUITE – Cecilia’s Raymond Calais Jr. (5) got behind the Carencro secondary but couldn’t hang on to this pass during last week’s jamboree contest. The Bulldogs came up short against the Class 5A Bears, falling 21-6. (Geralyn Thomassee) 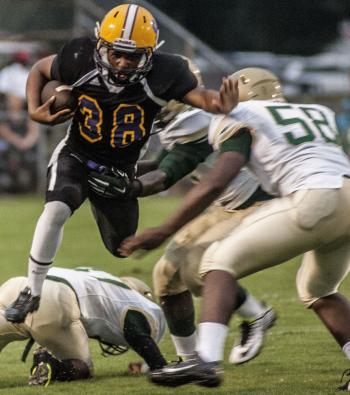 SM RUNNING BACK Johnny Leday leaps over one Acadiana defender as two other Rams close in to make the stop. A smothering defense helped the Rams hand the Tigers a 30-0 jamboree defeat.
(Kalyb Boudreaux 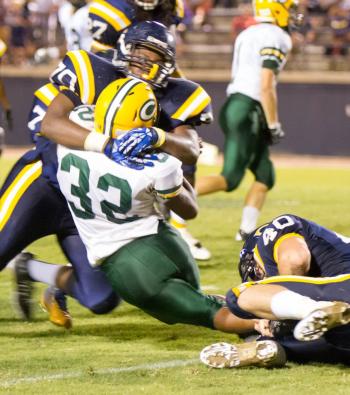 CRUNCH!! Cecilia running back Matt Broussard is taken down by a pair of Carencro defenders in last Friday’s jamboree. Broussard led the Bulldog ground attack with 16 yards on five carries.(Geralyn Thomassee) 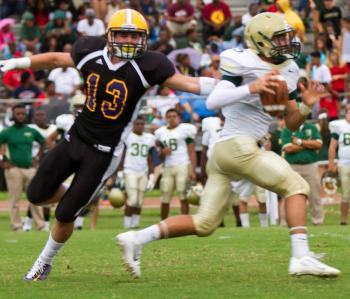 St. Martin Parish teams went 1-2 in the Lafayette Kiwanis Jamboree last week in Lafayette and Carencro.
Breaux Bridge claimed the parish’s only victory with an impressive 12-0 shutout of the Livonia Wildcats at Clark Field on Thursday.
Cecilia and St. Martinville didn’t fare quite as well at Carencro on Friday against strong Class 5A teams. The Bulldogs fell to Carencro by 21-6 while The ’Ville was crushed by Acadiana, 30-0.

BB 12, Livonia 0
An aggressive, hard-hitting defense and speedy running backs helped spark the Breaux Bridge Tigers to a 12-0 shutout of Livonia, the 2013 Class 3A state runnerup.
Seniors Edward Batiste and Marquis Domonter picked up where they left off last year, giving the Tigers a potent 1-2 punch in the running game. Batiste rushed for 38 yards and a TD on seven totes while Domonter had only two carries but covered 18 yards.
Junior Drake Guidry got his first start at quarterback and completed 2-of-7 tosses for 39 yards but suffered two interceptions. Freshman backup Julian Leon finished the game with one completion on one attempt for 16 yards but was sacked three times.
Breaux Bridge struck early, with Batiste busting loose for 33 yards and a TD on the fourth play from scrimmage. Baylee Thibodeaux’s PAT kick was partially blocked.
Livonia ran back the ensuing kickoff 45 yards to put the Wildcats in business at the BB 32. But the stout Tiger defense held and the threat fizzled.
A 12-yard run by Domonter and a Guidry-to-Javeyan Williams pass good for 23 yards moved BB deep into Wildcat territory. But Guidry’s next pass attempt was picked off at the 15.
Defensive back Joseph Williams, who was named BB’s MVP for the jamboree, put six more points on the board when he picked off a Livonia pass and returned it 20 yards for a TD. The PAT kick was blocked, leaving the score at 12-0 over intermission.
Breaux Bridge got a break early in the second half when a Livonia punt attempt produced a bad snap that was recovered at the Wildcat 30 by Daryon Wiltz.
But a 15-yard penalty and a pass interception torpedoed the opportunity and Livonia got the ball back at its 4.
Three plays later Williams claimed his second interception at the Wildcat 36.
Ruben Hypolite broke for a 36-yard touchdown on the next play but the score was nullified by a holding penalty. Leon came through with a nice toss to Kaelan Onezine for a 16-yard pick up on 3rd-and-long and a first down at the 12, but then Leon was sacked three times and the Wildcats got the ball back at their 25 with time running down.

Acadiana 30, SMSH 0
The defending state Class 5A Rams used an impressive showing by running back Malik Eugene to run roughshod over St. Martinville in Friday night’s opening game at Carencro.
Eugene rushed for 97 yards and two touchdowns and returned a kickoff 72 yards for a third score against the struggling Tigers.
St. Martinville could never get its offense untracked, finishing with just 36 yards on the ground and 14 passing. Senior quarterback Jordan Papillion accounted for all but 15 of those yards, netting 23 on the ground despite several sacks and hitting on 3-of-4 pass attempts for 14 yards.
Sophomore Trevon Charles showed promise, rushing for 15 yards on eight carries while snaring two passes for 11 stripes.
The ’Ville’s fate was pretty much sealed over a stretch of just more than 60 seconds late in the first half.
Leading 7-0 on an early Eric Duhon TD, Eugene got his first score on a short run with 2:16 left in the half. SM’s next possession ended in disaster when the snap on a punt attempt sailed over kicker Dru Dugas’s head and out of the end zone for a safety at the 1:14 mark.
Forced to kick from their own 20 following the safety, the Tigers saw Eugene take the ball right up the middle for 72 yards and his second score with 1:04 on the clock, putting the Rams up by 23-0 at intermission.
St. Martinville’s only drive of any consequence came on its first possession of the second half and was aided by a facemask penalty against the Rams.
Papillion connected on 3-of-3 tosses and ran for 13 yards in helping his Tigers get to the Ram 31 before running out of gas.
The only score of the second half came when Eugene broke loose for 59 yards late in the game.

Carencro 21, Cecilia 6
While the Bulldog defense struggled to stop a strong Carencro running attack, junior quarterback Landon Roberts served notice that Cecilia is ready to move the ball through the air.
Bear running back Tyriek Campbell pounded out 98 yards and three touchdowns on 12 carries, repeatedly breaking tackles. And stable mate Devin Senegal added 30 stripes on five totes as Carencro rushed for a total of 153 yards.
But Roberts gave Bulldog fans something to cheer about, completing 8-of-10 passes for 74 yards and Cecilia’s only TD.
The ’Dogs just couldn’t get any traction against a big Bear defense as speedy running back Raymond Calais Jr. was limited to six yards on four tries. Junior fullback Matt Broussard finished with 16 yards on five carries.
Cecilia was plagued by penalties in the first half, drawing five flags that cost 55 yards. But the ’Dogs settled down and got through the second half without an infraction.
Back-to-back penalties late in the first period forced Cecilia to punt from its own 18, giving Carencro the ball at midfield. Seven plays later, with just 18 seconds on the clock, Campbell went 20 yards off a fake punt for his second TD that boosted the Bears to a 14-0 halftime lead.
Carencro stretched the margin to 21 points when Campbell capped a 12-play, 60-yard drive with an 8-yard TD run midway through the second half.
Cecilia’s only score came with under two minutes left in the game when Roberts lofted a perfect pass to Kenya Dartez for a 20-yard touchdown.
Rusty Robin led five Cecilia receivers with three catches for 36 yards.