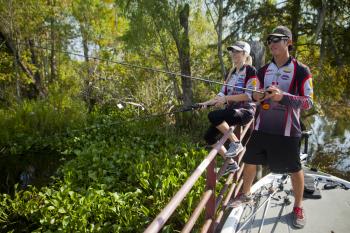 Nicholls State University will attract over 100 collegiate bass fishing teams to the Bayou Region community when it hosts the Carhartt Bassmaster College Series Central Regional Feb. 25-27 in Houma.
The three-day Central Regional tournament is the second in a series of five regional qualifiers leading up to the 2016 Carhartt Bassmaster College Series National Championship.
The Central Regional will be the first Bassmaster tournament hosted by Nicholls, whose bass fishing team formed in 2013. Nicholls student anglers Tyler Rivet and Allyson Marcel placed third out of 81 schools in the 2015 national championship held in Stevens Point, Wis.
“Participating in a qualifier like the Central Regional is how our bass fishing team was able to represent Nicholls on the national stage in Wisconsin,” said Alyson Theriot, faculty sponsor of the Nicholls Bass Fishing Team.
“Having Nicholls host one of the five regionals means more people and prospective students will be introduced to all that we offer here, and it supports the local economy because visiting anglers and their families will be eating at our restaurants and staying at our hotels.”
Bob’s Bayou Black Marina, located about 30 minutes from Nicholls, will serve as the Central Regional’s official launch and weigh-in station. The final tournament weigh-in, which is streamed online and televised nationally, will take place on the Nicholls campus.
The 2015 Central Regional was held on the Red River in Natchitoches, Louisiana.
“We always strive to select great venues for our college anglers. We look for venues and fisheries that can handle the growing field size, as well as provide great fishing and dramatic competition,” said Hank Weldon, B.A.S.S. College Series tournament manager. “Each year, we get to see a young, aspiring angler’s dream come true – and that’s always an unforgettable moment.”