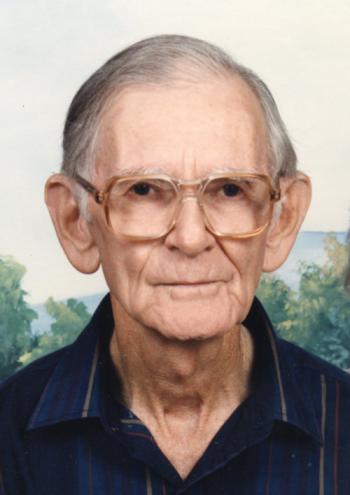 Centerville – A Mass of Christian burial celebrating the life of Wallace Lee Emmons Sr.,was held on Monday, April 27, 2015, at 11 a.m. at St. Joseph Catholic Church with a gathering of family and friends beginning at 9 a.m. and the recitation of the rosary at 10:30 a.m. He was laid to rest in the St. Joseph Cemetery in Centerville. Father William “Billy” Ruskoski officiated the services.
Mr. Wallace was born on January 8, 1920, the 11th of 12 children, his lifetime spanned one of the most historic and fast changing eras in world history. Starting off as a boy riding in the back of a wagon to attend revivals in the late 1920’s to eventually traveling by jet. He held great memories, such as working on his father’s cotton farm & plowing with a mule, the sight of a paved road being built near his home in the 1930’s, to serving in the U.S. Army along with his brothers after the fall of France, fighting on the front line of battle and moving to the rank of a Master Sergeant.
After the war, he became a carpenter and would continue his carpentering skills even after working at Columbia Chemicals from which he retired in 1981. He believed in hard work and lived his life this way; he loved his family and shared his love for deer hunting and fishing with his children, he loved arguing politics and was an avid baseball fan. Mr. Wallace was a loving husband, father, grandfather, great grandfather and friend to many and will be deeply missed by all.
Those left behind to cherish his memory include two sons, Wallace L. “Wally” Emmons Jr. and his wife Jackie, and Anthony Emmons and his wife Lori; two daughters, Catherine “Yvette” E. Louviere and her husband Anthony, and Paula E. Peltier and her husband Lee Jr.; 11 grandchildren, Jessica Emmons, Joni Emmons, Anthony Louviere III and his wife Allison, Kara Louviere Blanchard, Heather Peltier Wright and her husband Andy, Lee Roy Peltier III and his wife Lindsay, Peter Peltier, Quincy Emmons, Avery Emmons, Leah Emmons LeBlanc and her husband Chaz, and Zoe Emmons; seven great-grandchildren, Hudson Louviere, Benjamin and Emily Blanchard, Rob LeBlanc, Emma, Lily and Remy Peltier.
He was preceded in death by his wife of 61 years, Rita Guillory Emmons; his parents, Daniel and Ella Soileau Emmons; and his 11 brothers and sisters.
The family requests that you please pray for the peaceful repose of Mr. Wallace’s soul and that he finds eternal rest and peace.
Family and friends may view the obituary and express their condolences online by visiting www.iberts.com.
Arrangements were entrusted to Ibert’s Mortuary, Inc. in Franklin 337-828-5426.