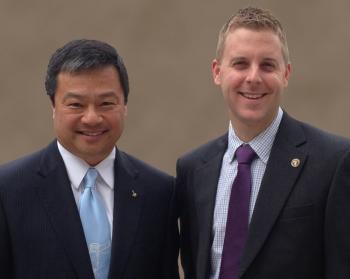 A University of Louisiana at Lafayette professor is helping to keep astronauts healthy.
Dr. Ray Boudreaux spoke to members of Congress about his NASA-funded research in Washington last week. The professor of practice in mechanical engineering appeared before the House Subcommittee on Space.
“As a fellow of the National Space Biomedical Research Institute, I was chosen to speak on behalf of all young scientists and engineers working in collaboration with the NSBRI,” Boudreaux says.
“Besides my presentation, we had a live down-link from the International Space Station with the two U.S. astronauts currently aboard the station.”
The event was cosponsored by NASA, the NSBRI and the Center for the Advancement of Science in Space, which manages the International Space Station U.S. National Laboratory.
Boudreaux’s research is focused on one of the hazards of extended space missions: bone loss.
On Earth, high-impact exercise, such as jumping, signals the body to build more bone. The reverse, the loss of bone mass, can happen in a way that’s similar to muscle loss. If you don’t use it, you’ll lose it.
“Astronauts in space can’t engage in those high-impact activities, because they are in a weightless environment,” he said.
Astronauts typically spend six months on the ISS. “During that time, their bones are reduced in mass by 1 to 2 percent each month. That’s 10 times the amount of bone loss experienced by post-menopausal women, the population with the highest risk of bone fracture here on Earth.”
Boudreaux’s research revealed that astronauts’ bone loss may be reduced with resistance exercise achieved with pneumatic-powered equipment and by taking a zoledronic acid, a novel bone-loss treatment drug. The drug is highly potent and long-lasting, so astronauts would only have to take it once a year.
He conducted the research with collaborative labs at Texas A&M University, Harvard Medical School, and MIT. His findings were published in the International Journal of Exercise Science and earned him the Young Investigator Award from the American Society for Bone and Mineral Research.
Next year, an American astronaut and Russian cosmonaut will spend a full year on the ISS, the longest mission yet.
“NASA’s long-range goal is a mission to Mars,” said Boudreaux. “So it’s essential that we understand the health risks crew members would face during such an extended period of time outside of earth’s gravity.”
Boudreaux is doing his part. “Specifically, my research aims to understand the skeletal alterations that microgravity imparts,” he said.
Boudreaux, who joined the UL Lafayette faculty in May, is also an alum. He earned a bachelor’s degree in mechanical engineering from the university in 2007. He also holds a master’s degree in bioengineering from Clemson University and a doctorate in biomedical engineering from Texas A&M University, College Station.