Balm for the budget crisis 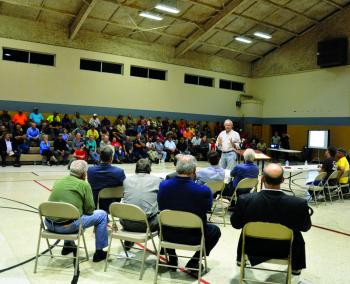 With Louisiana’s government facing a $800 million deficit, some high-level state officials expressed astonishment last week when St. Martin Parish crawfishermen told them where to find millions in new revenue out in the swamps of the Atchafalaya Basin.
“In 12 years as attorney general, I never heard one thing about what I heard today,” Richard Ieyoub Sr., newly minted commissioner of conservation in the John Bel Edwards administration, told the members of the Louisiana Crawfish Producers Association – West, meeting here on March 8.
“I’ll do whatever I can,” Ieyoub said. “We’re going to go back and talk to people and let them know what’s happening here.”
Earlier in the day, Ieyoub and his boss, Secretary of the Department of Natural Resources Thomas Harris, got an earful from brothers Mike and Ben Bienvenu, Catahoula crawfishermen, environmentalist Harold Schoeffler of Lafayette, and a few others with intimate knowledge of the decades-old Basin land wars.
Their thesis is this: As the Basin has silted in, many of its former lakes have filled in and become land – at least seasonally. These citizens – and there are lawyers among them – maintain that dry lake beds lawfully belong to the state, but that private landowners are claiming these “new” lands and the oil and gas royalties they produce.
Yet the state, say the crawfishermen and their lawyers, has not lifted a finger to recoup this significant revenue steam.
The nebulous ownership of Basin lands dates back to the Swampland Act of 1849 in which the United States transferred “waste land” to the state in the hopes that it would be leveed, drained, cleared and plowed or grazed. The lands (but not, according to Louisiana Supreme Court rulings going back to at least 1919, the navigable streams and lakes) were sold mostly to big out-of-state corporations.
Meanwhile, a hardy population of pioneers had been living off the natural bounty of the swamps, the moss, fish, fur and game. Their descendants, herded into small communities like Henderson and Catahoula to make way for the government’s Mississippi flood spillway, maintained their historic connection to the swamps. They hunted, fished and frogged for food, and trapped deepwater crawfish for cash.
During crawfish season, much of the “land” in the Basin is under water deep enough to permit navigation by 20-foot skiffs with 200-hp outboards. Ownership issues arose when landowners (or “claimants,” as the Bienvenus would have it) began demanding fees from the fishermen to trap in these flooded lands, began confiscating traps and calling on the sheriff to arrest trespassers.
Over a decade ago, LCPA-West sued the state to establish boundaries between private and public lands in the Basin, but the court threw the lawsuit out, saying the crawfishermen, who did not own any of the land, had no standing to sue.
They’ve had legal victories over the sealing off of a perched lake (an access issue) and the destruction wrought by pipelines (a water quality issue) but their overall sense remains that the State of Louisiana is solidly on the side of the landowners. It’s a notion bolstered by a Baton Rouge jury’s decision in Dan Collins vs. Louisiana Department of Natural Resources back in December. Collins, a contractor, was awarded damages after the jury found he was cut out of contracts by DNR for blowing the whistle on a publicly-funded canal dredged to benefit Basin landowners.
“Y’all have inherited a corrupt DNR,” Collins told Ieyoub and Harris at last week’s meeting. “The question now is, is this administration going to support the corruption of the last administration?”
Before rising to the top job at DNR, Harris served as administrator of DNR’s Technology Assessment Division. Before that, he spent nearly a decade with the Louisiana Department of Environmental Quality.
Ieyoub was the state attorney general of Louisiana from 1992 to 2004 and the Calcasieu Parish district attorney from 1984 to 1992.
Others addressing the LCPA-West annual meeting were retired Lt. Gen. Russel Honoré, recruiting for his pollution-fighting Green Army; environmental lawyers Gordon Schoeffler and Joseph “Buzzy” Joy, updating the group on their ongoing legal battles; and a succession of politicians seeking the fishermen’s support in upcoming elections for the U.S. House and Senate.