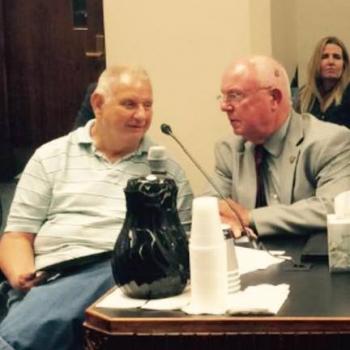 Don “Tuffy” Resweber, president of ARC of St. Martin, and Phil Barras, an ARC client in St. Martinville, were among those testifying before the Louisiana Senate Finance Committee Friday, May 27, just before the committee voted to restore funding to programs, like ARC, supporting adults and children with severe disabilities and the elderly.
The vote on the committee’s version of next year’s state budget was taken Monday, May 30, and it should go to the full Senate today, Wednesday, June 1.
Also going to bat for the program were Parish Councilman Chris Tauzin, who vouched for Parish Government’s support of the program, and state Sen. Fred Mills of Parks, who apparently shooed, via phone text, testimony-weary members back into the chamber when Barras and Resweber took the stand.
“The hearing began at 9 a.m. with over 200 individuals with disabilities in attendance,” Resweber said. “I did not realize that our group ‘Support Waiver’ was placed last and the Children’s groups went first. After hearing many compassionate testimonies, Sen. Eric LaFleur, chairman, requested the remaining group cut their testimony to avoid repetition and imposed a time limit of two minutes.”
Resweber told Teche News everything he had planned to say had already been said. So he decided instead to interview Barras on the stand.
“I looked up and all the committee members were out on break except the chairman. There had been no lunch break and it was almost 3 p.m.
“But when Phil and I were finally called up to testify, low and behold every member of the committee was back!”
Resweber said he doesn’t know for sure, but he thinks Sen. Mills, who was texting various committee members, might have had a hand in that.
“(Barras) told the committee he always had a job, sometimes holding three jobs at one time. If he were sent home with no job he would sit in his home and look out the window all day and that would be boring! He said how his mama had taught him everything! She prepared him to live on his own. We got in the fact that he attends many civic meetings with many card carrying memberships. He singled out band mascot and over 50 years in the St. Martinville Fire Department. He showed that he was very productive to society and wants to be like everyone else!”
Resweber said committee members began questioning Barras themselves.
“Yes, he had touched them, he said.
Chairman LaFleur even took the accompanying photo of the pair testifying and sent it to Mills via cellphone.