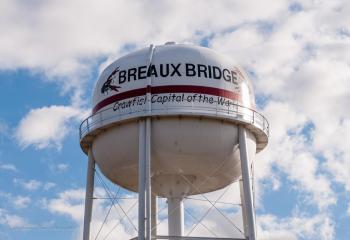 The Bear Creek, Bayou Bend, North Bridge and Badon Estates subdivisions, which were annexed by the city in 2003, have had water service provided by the Co-Op, which, in turn, has purchased bulk water from the City of Breaux Bridge to serve these areas.

It all comes down to low water pressure and its root cause, infrastructure limitations.

According to Chris Richard, Breaux Bridge city engineer, and Bruce Guidry, president of the Co-Op, the four-inch water lines, laid many years ago when the area was being developed, are woefully inadequate to meet the ever increasing demands placed on the system.

Because of this, there are no fire hydrants in any of the above mentioned subdivisions.

While the city currently has an “excellent” fire rating, a number of city officials, including the mayor, are concerned that this rating may be downgraded due to the lack of fire hydrants. If this happens, it will affect the entire city, resulting in higher homeowners’ insurance premiums citywide.

City Councilmen Terry Thibodeaux and Gary Champagne, who have represented residents north of I-10, feel that now is the time to gin up this project considering the city’s favorable borrowing position, the current low interest rates and the monies accrued in the city’s Special Sales Tax District – which continues to accumulate untapped funds due to stringent requirements regulating the access and use of these monies.

In an act of the state Legislature passed in 2012, a municipality seeking to spend these monies must prepare a “Master Plan” outlining the reasons and plans for doing so, subject to public input, by way of an advertised public hearing, and subsequent approval by the City Council. To date no such plan has been proposed.

In October of this year, Mayor Jack Dale Delhomme met with representatives from these subdivisions in what he characterized as a “productive meeting.” Two of the attendees, one of whom preferred not to be identified, told this reporter that the mayor was attentive to the group’s concerns and assured them that he would make the project a high priority.

In a subsequent interview, Delhomme told this reporter that, while results cannot happen overnight, he had directed the city engineer to come up with a cost proposal, which came out to $1.6 million. Delhomme added that he had advised the group that residents of these subdivisions may have to bear some of the financial costs associated with the project, which the representatives seemed agreeable to.

Echoing the sense of urgency expressed by Thibodeaux and Champagne, Delhomme added, “Now’s the time to move ... It’s moving forward.”

At their regular meeting held on Nov. 7, the Cecilia Water Co-Op heard Mayor Delhomme’s vision for the project.

The mayor advised the group of his intention to run twelve inch lines, connected to the City’s newly constructed water tower near I-10. In conjunction with running eight and six inch feeder lines to the subdivisions, Delhomme said, this would remedy the problem of low water pressure and allow for the installation of fire hydrants.

Co-Op President Guidry and Mayor Delhomme proceeded then to discuss options for the City of Breaux Bridge to purchase existing meters, boxes and water lines.

Guidry then brought up the point that he would have to confer with federal officials as to whether the sale could happen since the system, infrastructure and customer base is currently used as collateral for their Rural Water Development loan with the U.S. Department of Agriculture.

Guidry thanked the mayor for the positive working relationship developed over the years and said that he hopes to have answers to the above questions, as well as cost figures, for the value of existing infrastructure, by their next meeting in December.

In a subsequent interview with this reporter, Chris Richard reiterated that the issue concerning the Co-Op’s loan with USDA must be resolved before any progress on the project can be made.

Richard said that if USDA gives their approval for the sale and the two parties agree on a selling price for the infrastructure, construction could begin as early as the fall of 2014. He estimated that the construction phase should take between nine to 12 months.