Stephensville flood-proofing could keep premiums down 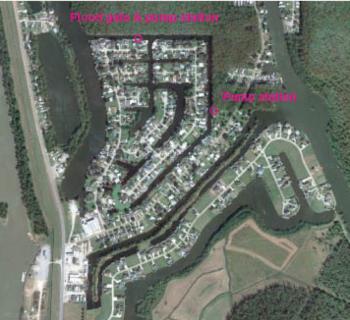 Both FEMA and the U.S. Army Corps of Engineers are on board with a plan to keep floodwaters out of a lower St. Martin Parish subdivision, which might stave off huge increases in flood insurance premiums in the future, Parish President Guy Cormier said Tuesday.
In any case, the federal agencies, the engineering firm doing the work, and a majority of the residents of Bayou Estates are convinced the $3 million project involving a flood wall, flood gate and pump stations will keep Lake Palourde from backing up into people’s homes every other year or so.
“I’d like to remind everybody that when we started this, insurance was not even a consideration,” said Councilman Carroll Delahoussaye, who represents the area. “It was flooding.”
It’s looking good for a congressional delay of the U.S. Biggert-Waters Flood Insurance Reform Act of 2012, which can increase flood insurance premiums 10-fold for persons in areas that flood easily. However, drastic increases appear inevitable at some point in the future, Cormier said.
One of the major problems with Biggert-Waters (named for its authors U.S. Reps. Maxine Waters, D-Calif., and Judy Biggert, R-Ill.) is that it does not recognize non-federal flood-protection levees, flood walls and other infrastructure. But with the Corps permitting this one, and FEMA actually kicking in about $1 million to build it, there’s a good chance this project will be considered.
“Now more than anytime is the best time to build this project,” Cormier told the Parish Council. “I’d be floored if anyone would be against this knowing what is going to happen to their insurance rates.”
There were objections from residents during the public hearing process. Chief among them was the aesthetic downside of being ringed with a flood wall made of sheet piling. There are 175 homes in the Stephensville subdivision, which is north of Morgan City.
Mo Saleh and Benedict Rousselle of Professional Engineering and Environmental Consultants, Inc., briefed the council on the project, which involves encircling the subdivision with a sheet-pile flood wall, putting a flood gate in the north canal, building a new pumping station and improving an existing one.
The 120-day permitting process is expected to begin shortly, Saleh said.