A preview of Henderson Swamp 'at its worst' 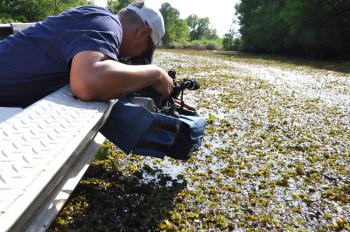 KATC-TV cameraman Justin Terro videos a blanket of giant salvinia skimming by as Henderson Mayor Sherbin Collette, a forth-generation commercial fisherman, pilots his crawfish skiff along I-10 toward the levee. (Ken Grissom)

Scientists call it Salvinia molesta. That ought to tell you something.
Giant salvinia, as the invasive floating fern is commonly called, has now invaded Henderson Swamp. And according to Henderson Mayor and fourth-generation commercial fisherman Sherbin Collette, this has the potential of being more detrimental than any of the infestations that have come before it, including hydrilla and hyacinth.
“I have seen the lake at its best, and now I’m seeing it at its worst,” Collette told reporters on a tour of the swamp between Interstate 10 and the gates that hold the water level artificially high when the river is low – hence “Henderson Lake.”
The salvinia, which is native to South America, was rafted up against the old I-10 spoil banks, which are now narrow ribbons of forest. But a few days earlier, an unseasonable north wind had it along the levee in vast mats, sending shocks of alarm through the thriving but fragile local tourist industry.
Salvinia doesn’t inhibit navigation like the mongo islands of hyacinth and dense, rooted forests of hydrilla, but when it takes over, you can forget fishing. You can even forget waterskiing or sightseeing.
“It will stink so bad out here, like a massive fish kill,” Collette said.
The growth rate of giant salvinia is phenomenal, Collette said. Given the right conditions, a small clump turns into complete coverage seemingly overnight, he said.
“Once it’s covered, everything dies,” Collette said. “It’s like a huge cesspool.”
The good news is that there is an easy and inexpensive – indeed, free – fix: let the lake fall when the river does.
The control structure – huge gates that have two settings, open and closed – were placed south of the natural bowl of Henderson Swamp so that construction of the Atchafalaya Basin bridge of I-10, which relied on barges to transport the spans, would not have to be halted during the dry season, Collette said.
“They were supposed to take them out after I-10 was finished, but some people thought it would be a good idea to keep them, to make the swamp into a lake, and they won,” he said.
In recent years, most people have come to the understanding that the “lake” bottom needs to dry out periodically. It helps to keep the noxious aquatic weeds under control and promote the growth of native vegetation good for the crawfish, shad, ducks, the whole natural chain of life, Collette said.
The “draw downs” tot that end have not been universally popular because of the large number of houseboats and floating camps now on the west side of the lake. The water falls rapidly and weekenders have to scramble to keep themselves afloat.
“The way to do it is to let the lake fall with the river,” Collette said. “Mother Nature knows what’s best.”
He said he said as much in a recent meeting with government biologists looking into the problem.
“I just hope they listen to me,” Collette said.