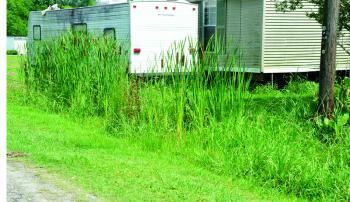 THIS DITCH along Devillier St. in Henderson has been an ongoing problem for resident Sally Angelle. Town officials say more maintenance employees will be hired and ditch-mowing equipment will be purchased when the budget allows. The northern annexation is expected to provide the funds. (Sally Angelle)

Henderson resident Sally Angelle appeared at the Monday, June 13, Town Council meeting seeking a solution to a long-standing problem.
Tall grass and cattails are overgrown in the drainage ditch alongside her property on Devillier Street. In periods of heavy rain the slow drainage caused, she said, by the overgrowth sets off the required overflow alarm in her sewage system. When that happens, she has to go outside in the rain, often in the middle of the night, to disable the alarm.
Angelle reports she has tried for months to get the problem remedied, but has had no luck so far. Mayor Sherbin Collette responded that the town lacks the budget and the equipment to maintain all roadside ditches in town, and that individual homeowners are responsible for maintenance of ditches that adjoin their property.
Legally, however, it appears that the task is supposed to be the responsibility of the town of Henderson. An e-mail from Parish President Guy Cormier indicates as much.
As to funding, according to financial records presented by Angelle, sufficient funds, she claims, appear to be in the budget and personnel are on the payroll to easily provide for the mowing or poisoning of the ditches for adequate drainage.
Collette said that manpower is not the only limitation. The town, he said, needs to purchase an offset-type mower to perform the operation safely and does not have the budget for it. He said that Henderson is doing all it can right now.
Collette said that the north annexation, when completed, will provide more funding and eventually, a full-time crew will be hired and equipment purchased to allow Henderson to take on more of the ditch mowing and other maintenance. For the time being, he said the ditches on Devillier Street would be sprayed and Angelle’s audible alarm turned off, leaving just a warning light to indicate an overflow.
In other business, Councilman Jody Meche said that recent hard rains are causing increased bank erosion along Bayou Portage. He pointed out that retaining walls on the north side of the Main St./La. 352 bridge at Canal St. are beginning to fail. Also, a 24” culvert system at Melancon St. is to be replaced with a 36” pipe, which, Colette said, will greatly improve drainage in that area.
Finally, the council approved the expenditure of $10,000 to pay legal expenses incurred in successfully defending Police Chief Leroy Guidry on state charges related to the alleged “quota system” for speeding tickets on I-10 and subsequent billing of the state for overtime hours. Former Assistant Police Chief Mack Lloyd pled guilty to the charges and Guidry was found not guilty in that case.