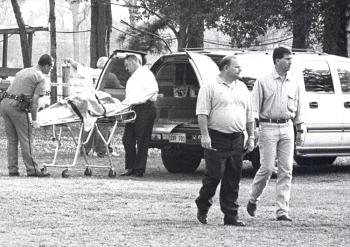 MURDER SCENE – Then Henderson Chief of Police Mike Hayes (foreground, left) and St. Martin Sheriff’s Office Capt. Scott Haydel, an assistant coroner, walk away as the body of Scott Latiolais is removed from the scene of his slaying in Henderson in this Teche News photo from 2002. (File photo) 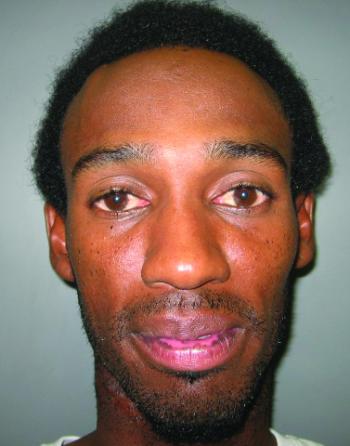 A 12-year-old case is finally coming to a head after a St. Martin Parish grand jury last week indicted the state’s star witness for second degree murder in the 2002 shotgun slaying of 31-year-old Scott Latiolais.
Assistant District Attorney Chester Cedars said after Marshall J. Alexander Jr. is brought into custody, he will make a determination about what to do with Timothy Roberts, the man who has been the chief suspect all these years, having been indicted not once but twice, and not for second degree murder but for first degree, punishable by death.
Thomas Latiolais, father of the victim, who once railed against the plodding wheels of justice for Roberts, turned his attention toward Alexander after word on the Henderson street implicating him became pervasive.
“We don’t want the wrong man to spend his life in jail,” Latiolais said. “We just want justice.”
Latiolais accepts that his son was killed in a classic drug-deal-gone-wrong confrontation, but he says the investigation by the St. Martin Sheriff’s Office was botched from the beginning. A novice detective was lead on the case, he said. There was physical evidence – gunpowder residue on the shooter’s clothing, tissue samples under the victim’s fingernails – that was never adequately processed, he said. Lots of exculpatory testimony was apparently ignored.
Scott Latiolais was killed with a shotgun blast to the back in the parking lot of the old Las’s Restaurant in Henderson between 11 p.m. and 11:30 p.m. on March 28, 2002. Roberts and Alexander were soon arrested, with Alexander charged as an accessory. He soon turned state’s witness.
The whole thing was a matter of money owed for drugs, Marshall said.
But the case went on for years, being continued and continued and continued, mostly because of the unavailability of witnesses on one side or the other.
Finally the case came to trial in October 2007 – and Marshall was a no-show. Cedars was forced to dismiss the charges against Roberts.
The veteran prosecutor told news outlets at the time that this was the toughest case he had ever been involved in, but that he was not giving up on it. In March 2008, he secured another indictment against Roberts. And the wheels began to grind again, slowly.
The file on this case is in eight folders. If you stack them up, they’re well over a foot high. The bulk of the material is documentation of subpoenas served, but if you dig around in there you discover plenty of exculpatory evidence, mostly dug up by an investigator for the defense. Records of telephone calls that might have exonerated Roberts were lost, either to time or carelessness. The street talk to which Tom Latiolais refers reverberates.
It continues to this day, and when it reached the ears of the victim’s own daughter, now grown, Tom Latiolais went to see Cedars, who helped him bring the matter before the investigators of the Louisiana State Police.
“The state police did an outstanding job on this case,” Cedars told Teche News.
“This is going to be an interesting trial,” he said.