How Breaux Bridge is weathering downturn 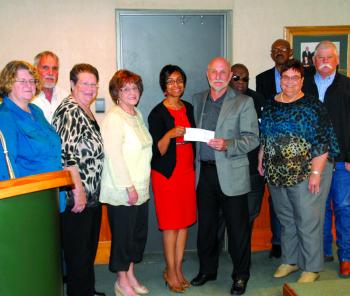 Sales tax receipts here are down as they are throughout the area, but so far, spending controls are keeping high priority projects on schedule.
At the March 8 City Council meeting, Mayor Ricky Calais reported that sales tax revenues are down 15.6 percent for the year. While city officials have not been able to do all they would like, he said, cost-cutting measures have made up most of the loss without exceeding the budget or cutting into infrastructure projects.
City engineer Chris Richard reported that the north sewer extension is probably within two weeks of completion and operational testing.
Utility work needed for the planned roundabout at Grand Point/La 347 and Doyle Melancon is still in the design phase, as is the widening of the Dorset St./Main Hwy. intersection.
Calais said that the plan is still uncertain for the existing house on the property purchased for the Dorset street project. The house could be moved, he said, but its value makes demolition more likely. Bids for demolition are being reviewed.
On another issue, District E representative Gary “Bimmie” Champagne voiced concern about the safety of the protruding hubcaps now seen on some vehicles. Police Chief Rollie Cantu said that state-wide efforts last year to limit the most extreme of these accessories failed. Champagne inquired whether the council could consider city ordinances to address the problem. New city legal council Bart Hebert said that there were probably legal grounds to do so. The council may introduce an ordinance at next month’s meeting.
Also, school board finance committee chairman Burton Dupuis appeared at the meeting to encourage support for the coming school bond issues. Voting on the issues will be April 9.
Dupuis stressed that the bonds were a continuance of expiring bonds and would not increase taxes on residents. The bonds are essential, he said, to continue vital ongoing maintenance and improvements to parish schools. Calais and the council took the step of introducing and passing a resolution of support for the bond proposals.
Finally, the council presented a donation of $10,000 to the St. Martin Parish Council on Aging. Accepting the donation, executive director Shanese Lewis said that, with state funding cutbacks, the donation could not have come at a better time.
She said that among their many programs, the meals-on-wheels is the most costly and probably the most vital. The Council on Aging currently delivers 141 meals every day in the parish, and sometimes that is a client’s only meal for the day. The council also provides housekeeping, transportation and shopping assistance for the house-bound as well as many other programs for elderly parish residents.