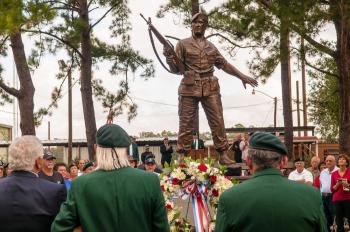 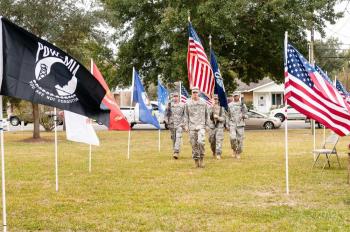 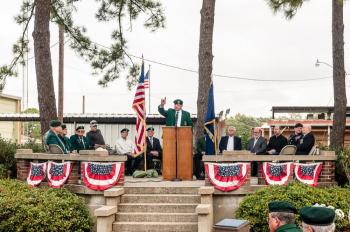 In a highly anticipated ceremony in Veterans Park Saturday, over 300 veterans, many from the Special Forces units, as well as their families, friends, and supporters – including a group of motorcycle enthusiasts – participated in the unveiling of a $60,000 bronze sculpture commemorating members of the Special Forces, particularly those who hailed from Breaux Bridge.
The artwork’s name, “Cajun Warrior,” comes from the moniker given to the Breaux Bridge detachment of the U.S. Army National Guard’s 20th Special Forces Group (SFG) founded in 1959. Its first commander was Lt. Col. Fred Patin from Breaux Bridge, a Silver- and Bronze-Star World War II hero.
The artist, Bill McGlaun of Cleveland, Texas, is known worldwide for his commemorative work and has pieces in such prestigious places as the Vatican and Ground Zero where his American Eagle sculpture sits atop what formerly was the ruins of the World Trade Center.
While a testament to the vision of local Special Forces Chapter 81, the “Cajun Warrior” monument would nonetheless not have been possible without the generous support of J. Weldon and Fran Granger of Houston, who donated the work. An Erath native, Granger is a philanthropist with a special interest in the arts.
Among the distinguished Special Forces veterans gathered for the event was retired Air Force Special Operations Col. Roland Guidry, founder of the Joint Allied Special Operations Center (JASOC). Guidry flew the first C-130 aircraft in the failed Iran hostage rescue mission, known as Operation Eagle Claw, in April, 1980. Guidry’s book, “The Guts to Try,” summed up well the message he conveyed to the gathering, Saturday morning.
Other Special Forces members present included retired Army Lt. Col. Johnny Raymond, who chaired the committee responsible for organizing the event; Col. Dale Gaudet, the last commander of Company D, the Breaux Bridge unit of the 20th SFG, which was deactivated in 1972; and 2nd Lt. Robert Romero, who was a featured speaker for the event.
The keynote address was given by SFG Battalion Operations Warrant Officer Jean P. Guidry, a Breaux Bridge native assigned to Eglin Air Force Base in Pensacola, Fla. Guidry noted that while U.S. conventional forces are being drawn down around the world, Special Operations numbers continue to steadily climb upward due to the unique and ever increasing challenges involved in counterterrorism. Like so many others, Guidry observed with amazement the large number of Special Forces members coming out of Breaux Bridge.
Guidry noted the close ties among this unassuming group of professionals devoted to the security of our great nation.
Some of the motorcycle clubs in attendance were the Patriot Guard Riders, Marine Corps League Riders, Special-Ops Riders, Combat Vet Riders and the Special Forces Riders, D.C.
At the conclusion of the ceremony a buffet lunch was held at Buck & Johnny’s Restaurant. Retired Sgt. Maj. Lennet Guidry led attendees in a Special Forces prayer and retired Lt. Col. Ken Lanzalaco presided over a POW-MIA ceremony.