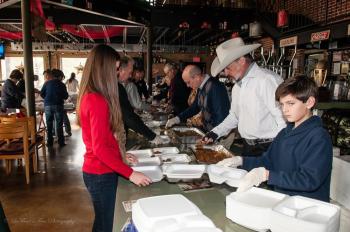 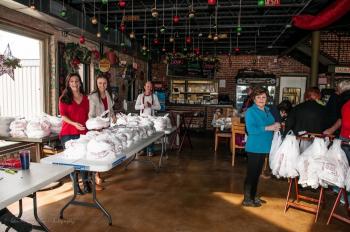 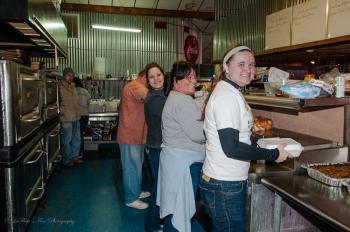 Scores of volunteers began as early as Wednesday to prepare traditional Thanksgiving meals for those, in the Breaux Bridge community, who otherwise would have gone lacking. By early Thursday morning teams worked like clockwork to cook and package over 1,000 meals for the less fortunate in our area.

Breaux Bridge restaurants Buck and Johnny's and Chez Jacquline together cooked over 100 turkeys with trimmings to be delivered to St. Joseph and St. Francis of Assisi Catholic churches, as well to as the St. Martin Council on Aging, for distribution to needy persons throughout the community. Meals were also available for pick up at Buck and Johnny's and Main Street Pizza, where Chef Jacquline's operation was based.

Owners of Main Street Pizza, Lisa Foster and Nick Breaux, graciously allowed Chef Jacquline to use their facility as a meal preparation and distribution site. This marks the first year Jacqueline operated out of this location. For the previous ten plus years she did so out of her restaurant on Bridge St.

David Buck, co-owner of Buck and Johnnys, started this Thanksgiving tradition approximately ten years ago and this year, as in the previous four, he teamed up with Johnny and Coatney Raymond who played a major role in planning and coordinating this event.

The community would do well to recognize all involved for so generously devoting their time and effort to ensure that all of our citizens had the opportunity to share in the blessings celebrated by this special holiday.