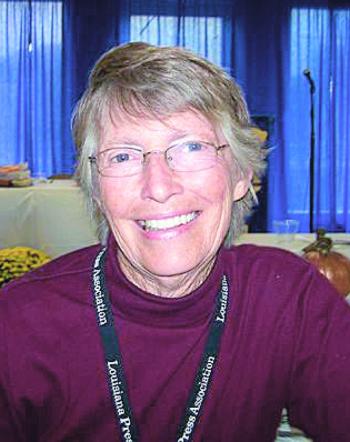 Every day this past week the weather forecast has been for rain, sometimes as much as 80 percent. So far we had a slight trickle lasting just a few minutes.
My garden is looking rather thirsty. I’m picking some nice tomatoes but the plants are definitely reaching the end of their productive life. I have picked lots of green beans, plenty of red radishes, some nice carrots, a few beets but not a single cucumber. The latter plants grew beautiful green leaves, had lots of flowers and not one single cucumber. I must have bought a pack of dud seeds or something. Usually cucumbers grow in abundance but not these.
The Belle River boat landing is pretty empty most of each week. It’s so hot! The dog and I wait until at least 4 p.m. to take our walks in hopes it will be a little cooler. At best, the shade from the trees along the spillway spreads onto the levee where I walk. The levee has recently been mowed both sides so I can walk pretty close to the water.
Bingo on June 22 was well attended and we all enjoyed the red, white and blue cupcakes Morgan Ochsner brought compliments of Humana. Myself and Joyce Melancon were the only two June birthdays. I’m not sure how it came up, but we got to talking about World War II during our cupcake break and I mentioned that I have a picture taken from my hometown newspaper, the Jackson Citizen Patriot, showing me standing in front of my mother and lots of other women, waving and obviously cheering as a parade passed celebrating V-J Day, Aug. 14 or 15, l945, when WWII officially ended.
From the looks of the picture, I probably had no good idea of what I was waving about. I was 6 years old. It’s a nice picture, however, especially of my mother who was a very attractive woman in a pretty dress, open toed shoes which are back in style now with her hair sort of rolled up on both sides.
I mowed my grass last week and unthinkingly passed over a shell path by my back patio door. You guessed it. A stone flew right through the glass. This is the second time in two years I’ve done this. It is getting seriously more expensive to replace the glass! And it’s a single pane, opening right into the house, so I taped plastic over the opening until the glass guy could come. I’ll bet I went to exit that door a thousand times in two days. Like turning on the light switch when you know you have no power!
In two weeks Bonneval Construction will install the acoustic ceiling in the Belle River center. The first July bingo might have to be cancelled while that work takes place but it will be worth the wait. Keep an eye on the roadside sign for updates.
Next comes the parking lot extension which is a project even more important now that the voting precinct will be located in the center, rather than behind the Belle River fire station. The current location is sort of in an obscure spot with no parking to speak of.
Last but not least, best wishes to Grover Angelle and Bertha Israel on their marriage!