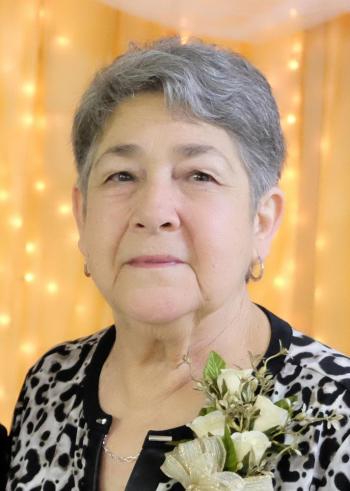 Breaux Bridge – A Mass of Christian Burial was celebrated at 1 p.m. on Tuesday, February 14, 2017, at St. Bernard Catholic Church for Rosalind Perazzo LeBlanc, 71, who passed away on Saturday, February 11, 2017, at 7:56 a.m. at Lafayette General Medical Center with her family by her side.
Visiting hours were observed from 4 p.m. until 10 p.m. on Monday and continued on Tuesday at 8 a.m. until 12:30 p.m. at Pellerin Funeral Home in Breaux Bridge.
A rosary was prayed at 7 p.m. on Monday.
Rev. Garrett McIntyre officiated at the Funeral Mass. Scriptures were read by Rose Green, Robert Bergeron and Jane Guidry LeBlanc. Gift Bearers were Amelia, Malena and Beau Michael LeBlanc, and Alyssa Dupuis.
Interment followed at St. Bernard Cemetery No. 2 in Breaux Bridge.
Rosalind was married to Richard J. LeBlanc for over 50 years. She was a soft-spoken woman who had a joy for life. Rosalind was the first of two daughters born to John H. Perazzo and Catherine “Beulah” Goodman Perazzo of Venice, La.
Rosalind worked for 41 years at Frank’s Casing Crew & Rental Tools as a dedicated office manager. After her retirement, Rosalind enjoyed being home with her family, especially with her five grandchildren. She enjoyed dancing in the kitchen or anywhere she could and cooking big Sunday meals for the family and anyone else who would stop by. She also enjoyed going out to eat, going to the casino, collecting bells, and just being with family and friends.
She is survived by her loving husband, Richard J. LeBlanc; two sons, John “Johnny” LeBlanc and wife Erica, and Mark LeBlanc and wife Cathy; one daughter, Kristen Dupuis and husband Ben; five grandchildren, Jordan LeBlanc, Amelia LeBlanc, Malena LeBlanc, Beau Michael LeBlanc and Alyssa Dupuis; her mother, Catherine “Beulah” Goodman Perazzo; and her sister, Sheila Lott.
She was preceded in death by father, John H. Perazzo; and her in-laws, Odon and Clara Blanchard LeBlanc.
Pallbearers were Randy LeBlanc, Blasian LeBlanc, Jordan LeBlanc, Dayne Green, Kerry Lott and Randall Lott.
The family requests that memorial donations be made in her name to the American Heart Association/American Stroke Association, P.O. Box 840692, Dallas, TX 75284-0692 or to the National Kidney Foundation of Louisiana Inc., 8200 Hampson Street, Suite 425, New Orleans, LA 70118.
Pellerin Funeral Home of Breaux Bridge was in charge of arrangements.
To view on-line obituary, sign guestbook and view video tribute, go to www.pellerinfuneralhome.com.