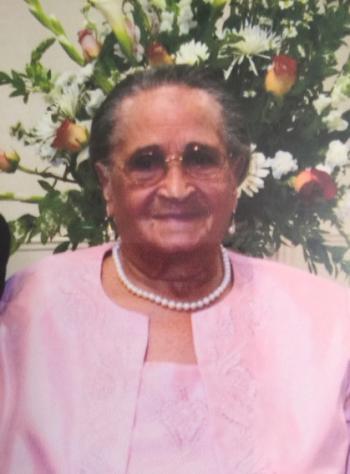 Funeral services will be held Saturday, February 28, 2015, at an 11 a.m. Mass of Christian Burial in St. Francis Regis Catholic Church for Mabel Julien, 89, who passed away Friday, February 20, 2015, at her residence in Arnaudville.
On May 19, 1925, in Arnaudville, Louisiana, a baby girl was born to George Calais and Florena Cluse whom they named Mable.
She was taught to work hard, be respectful, and put God first in her life.
In 1942 she married Atlas Marcus Enard. To that union, she reared 11 children, Joseph Howard Enard and his wife Ednam of Houston, Texas, Joseph Harold Enard (deceased), Mary Rose Enard of West Hollywood, California, Clayton Joseph Enard and his wife Patricia of Houston, Texas, Betty L. Enard of Houston, Texas, Rena Enard Moore and her husband Keith, of Monroe, Joseph Charles Enard of Houston, Texas, John Michael Enard of Houston, Texas, Cathy Ann Enard of Sugarland, Texas, John Ronald Enard and his wife Carol of Channelview, Texas, and Lisa Ann Wallace and her husband, Rodney, of Silver Spring, Md.
She later in life united in marriage with Fred Julian who has been a part of her life for the past 35 years.
She is preceded in death by her parents, George Calais and the former Florena Cluse; one sister, Alma Calais Spencer of Crowley; three brothers, Clinton Calais of Arnaudville, Daniel Calais of Houston, Texas, and Chester Calais of Lafayette; one grandson, Joseph Lamont Enard of Houston Texas; one great-granddaughter, Kel-Vineshia Frederick of Houston, Texas; and one godchild, Mac Taylor Jr. of Arnaudville.
Left to cherish her memories are her siblings, Donald Kelly and his wife Wanda of Houston, Texas, Joseph Calais and his wife, Doritha, Gloria “Jean” Calais Isadore, Georgia “Black” Calais, Eva Flugence and Anna Lou Williams, all of Lafayette; one goddaughter, Cynthia Spencer Ardoin of Houston, Texas; 17 grandchildren, 17 great-grandchildren and a host of nieces, nephews, family, and friends.
The family request visiting hours be observed from 6 p.m. until 9 p.m. Friday and will continue from 8 a.m. until service time on Saturday.
Melancon Funeral Home of Arnaudville, 224 Main Street, 337-754-5725, is in charge of arrangements.