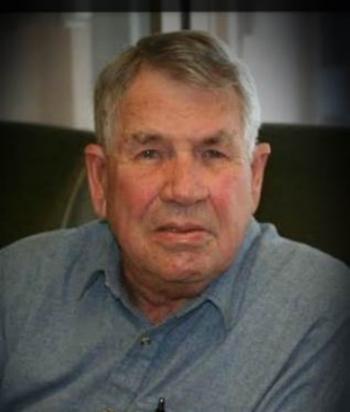 Funeral services will be held on Wednesday, October 15, 2014, at 2 p.m. in Evangeline Memorial Gardens Chapel in Carencro for Clarence “Scotty” Hayes, 80, who passed away on Saturday, October 11, 2014, at Lafayette General Medical Center in Lafayette.
Interment will be in Evangeline Memorial Gardens in Carencro. The Rev. Chad Thibodeaux, pastor of Vatican Baptist Church, will officiate at the services.
Mr. Hayes was a native of Cecilia and a resident of Sunset. He was retired with Hughes Tool Co./Baker Hughes with over 30 years of service. A veteran of the United States Air Force, Mr. Hayes served in the Korean War.
Survivors include his wife of 61 years, the former Lanelle Strong of Sunset; one daughter, Kathy Usie and her husband Larry of Henderson; four brothers, Tony Hayes and his wife Mary of Grande Cache, Alberta, Canada, Easton Hayes and his wife Mary, of Breaux Bridge, Larry Hayes and his wife Gayle of Broussard, and Wilton Bobby Hayes of Breaux Bridge; two sisters, Marella Trahan and her husband Andy of Cankton and Beverly Clark and her husband Robert of Tullos, La.; two grandchildren, M’lyn Usie of New Orleans and Dylan Usie of Henderson; and many nieces, nephews, relatives and friends.
He was preceded in death by his parents, Sauvol Hayes and the former Annie Lou Champagne; three brothers, Jason Hayes, Darrel Hayes and Herbon Hayes.
The family requests that visiting hours be observed from at 9 a.m. Wednesday until service time on Wednesday.
View the obituary and guestbook online at www.melanconfuneralhome.net.
Melancon Funeral Home, Evangeline Memorial Gardens Chapel, 4117 N. University Ave., Carencro, 337-896-3232, is in charge of arrangements