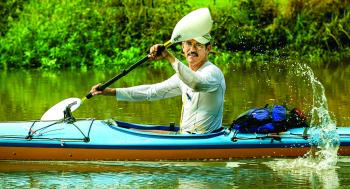 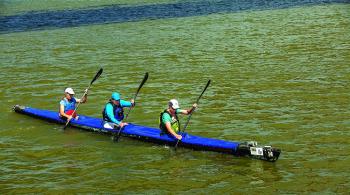 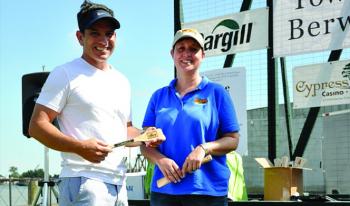 Berwick – Forget Karen, it was all about Morgan, Virginia, Sandy and Randy as Tour du Teche IV ended in bright sunshine amid a big block party on Front Street here Sunday.
The Texas Heartbreakers – Morgan Kohut of Houston, Virginia Parker of Austin, and Sandy Yonley of Houston – got swamped by a fast-moving quarter boat near Charenton, fought through a squall that put whitecaps on the Teche, and went on to win the Racing Division and best time overall of 20 hours, 55 minutes and 17 seconds. They shared $1,200 in prize money.
In second place was Brad Pennington of Houston, paddling solo, with a total time of 20:56:12.
Randy Hargroder, 58. in his third kayak race, finished the three-day staged race in 23 hours, 54 minutes and 25 seconds to take first place in the Voyageur Division.
Tour du Teche recognizes first-, second- and third-place winners in various boat classes. Racing Division winners receive a percentage of the total purse while Voyageurs, or recreational paddlers, get miniature cypress paddle trophies.
A big winner was the City of Berwick, which hosts the TDT finish line in the shadow of its iconic red lighthouse on the Atchafalaya River. As Tropical Storm Karen blew apart way out in the Gulf, the sun shone, and the classic sounds of the band LA South reverberated off the concrete flood wall, Berwick threw a block party nearly twice the size of last year’s.
There were events all up and down the bayou in conjunction with the annual paddle race. The Harvest Moon Festival was held in Franklin, the Grande Boucherie des Cajuns in St. Martinville and the Citywide Garage Sale in Breaux Bridge. Numerous private parties also popped up along the bayou as the colorful parade of kayaks and canoes made their way downstream.
Unlike previous years, the roughest section was in the usually mild-mannered Teche when a series of squalls boiled up ahead of a cold front just north of New Iberia on Saturday. But the sky cleared on Sunday, and while the wind steadily increased, it came right down the Atchafalaya, giving the racers a boost without throwing up the waves that had been so problematic in TDTs II and III,
The Bourré Pot, a unique feature of Tour du Teche, was cracked only in one Racing class, solo single-blade (canoe), by Neil Wiesner-Hanks of Mequon, Wis., whose time of 22:15:36 beat last year’s record by nearly an hour.
St. Martin Sheriff Ronny Theriot put up a “speed trap” in Breaux Bridge, deputies timing the boats over a marked section. Winning $600 in Racing were Gustave “Tave” Lamperez of St. Charles, Ill. and Gareth Stevens of Hubertus, Wis. The $200 prize in Voyageur went to Nick Kinderman of Ocean Springs, Miss., (organizer of the annual Battle on the Bayou paddle race there).
Tour du Teche starts at Port Barre on Bayou Courtableau on Friday with a stop in St. Martinville, 49 miles down the Teche. From there, the paddlers to 59 miles to Franklin on Saturday. And on Sunday, the final leg to Berwick is a “mere” 27 miles. There are four portages, places where the paddlers must carry their boats overland. One is at the Keystone Lock and Dam below St. Martinville, two are at the floodgates where the Wax Lake Outlet crosses Bayou Teche, and the final one is the Berwick Lock where the Teche meets the Atchafalaya.
Racing starts at 9 a.m. each day and Voyageur at 7 a.m.
There are numerous one-day races held at the same time, either mirroring a leg of TDT or even shorter, like the 34-mile “Crawfish” race from Port Barre to Breaux Bridge or the 24-mile “Hot Sauce” St. Martinville to New Iberia.
Tour du Teche, an economic development endeavor by the non-profit Tour du Teche, Inc., always starts on the first Friday of October. TDT, Inc., also puts on shorter races during the year, including the Petite Tour du Teche designed to introduce the sport to youngsters.
For more information, go to www.tourduteche.com.