They don’t call it Breaux Bridge for nothing 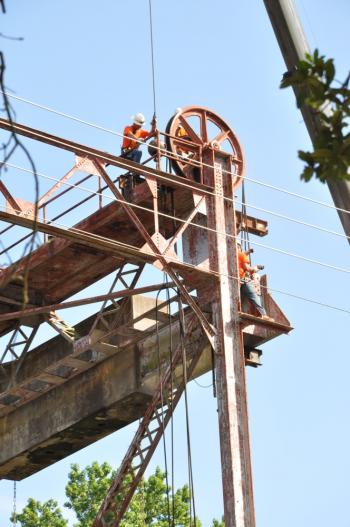 Brain-storming to get the bridge painted
BREAUX BRIDGE

There are several other 60-plus-year-old lift-span bridges extant on Bayou Teche – one at Parks, for example. One at Loreauville. But the bridge everybody knows is the one here. Le pont de Pont Breaux.

This bridge is the successor to a succession of bridges, beginning with a rope foot bridge in pioneer times. (Another is parked parallel to Parc des Ponts and serves as a stage for bayou-side events.)

It’s fame was cemented when local minutemen commandeered the bridge and commissioned artist Darryl “Demo” Demourelle to paint the iconic crawfish on its overarching counterweights.

Now the whole thing needs painting. Several years ago the Louisiana Department of Transportation and Development, citing its deteriorating condition, was all set to cut the steel superstructure off the bridge and make it a fixed span. Local office-holders, businessmen and civic leaders – including some of those early bridge-commandeering minutemen – rallied and forced the state to not only back off but actually spring for repairs to the giant pulley system that raises the deck for the now-rare instance of oversize bayou traffic.

But the problem of the deteriorating superstructure remains. The bridge needs to be sandblasted and painted at cost of at least a half a million dollars, most of which will have to be raised from private donations.

The Breaux Bridge Area Chamber of Commerce is spearheading a campaign, along with several other civic organizations, to solicit donations and hold fund-raisers. Everybody is invited to the kickoff function at the chamber, at the foot of the bridge on the west side, at 8:30 a.m. Friday, Nov. 15. No contribution, monetary or inspirational, is too small.