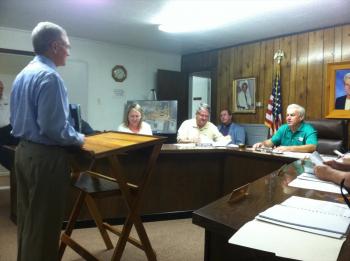 Auditors gave the Town of Henderson a clean bill of health at the November town council meeting.

The town collected $705,383 in fines and forfeitures during the 12-month period.

Russell Champagne of the accounting firm of Kolder, Champagne, Slaven & Co., warned that the town needed to be vigilant around the enterprise fund, which in part is used by the sewer plant. There was a negative balance of the two years in a row, although improved. This year’s deficit was $52,218, while last year’s was around $130,000.

Mayor Sherbin Collette and the council went into executive session with town attorney Jerry Mallet and visiting attorneys Allan Durand and Warren Ashy. Mallet’s only comment on the session was that it concerned ongoing litigation.

Mayor Pro Tem Don LeGrand said he is awaiting bids to go out for the Old Henderson Highway project. The project was temporarily halted by the shutdown of the federal government.

Toward the end of the meeting, Collette informed the council that the transfer of the Farmers and Merchants Bank building to the Town of Henderson was finalized.

He had commissioned a preliminary report on renovations to the facility to enable it to be used as city hall and to apply for the necessary capital outlay funds. The non-binding report came in at $749,530, including a new courtroom and mayor’s office. The police department would be housed in back in a metal building.

Although monies for capital outlay projects is dwindling, Collette said he is hoping the governor and the legislature will come through with the funds.