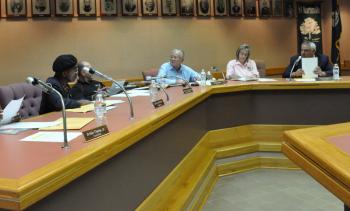 For the past four-plus years, the city has provided an apartment to a University of Chicago forensic researcher. The matters of cost/benefit and liability for the living quarters, as well as the veracity of the project, were the subject of mildly heated discussion at the July 19 City Council meeting.
Jihad Muhammad, founder of the African Scientific Research Institute, is a leading, accredited medical imaging and forensic reconstruction expert (see "Who is Jihad Muhammad?") who is involved in the effort to locate, preserve and investigate slave burial sites throughout the country. Such a site has been identified in the Village of Parks. At the time the decision was made to provide the apartment, Muhammad was associated with ULL faculty members involved in the research.
Named “Promised Land Slave Cemetery,” the site is on private property and not currently accessible. Plans have been suggested to make the site public and establish a visitor center and related businesses around the site, which until recently laid forgotten along Bayou Teche since the time before emancipation.
Mayor Thomas Nelson said that in 2012, when the decision was made to provide living quarters, a nominal price of $100 was placed on the unused apartment in the building behind La Maison Duchamp. When ULL began paying the rent, Thomas said, he made the decision to forgo the payments in appreciation for the many things the university had done for the city and parish over the years.
Residents Aaron Flegeance, Melba Braud and Helen Bourda spoke enthusiastically in defense of Muhammad and his work. All three have been deeply involved in the establishment of the African American Museum and projects attempting to trace the histories of slaves in South Louisiana.
City attorney Alan Durand told the council that he needed to research the contract drawn in 2012 for use of the quarters to find out what the city’s obligations and potential liabilities are. He said that he would have the information at the next council meeting.
In other business, George Choplin and Suzy Carpenter of the Kiwanis presented invitations to council members for the 2016 Pepper Extravaganza on Aug. 20. The Kiwanis will honor the city with a “Hall of Fame Award” at the event, which will be held at the Woodmen Life building at 1255 Capritto-Forty Arpent Road.
The Pepper Festival itself will be held at the St. Martinville Festival Grounds on Sept. 16-17. This will be the festival’s 25th year in St. Martinville. Carpenter said that the Pepper Festival returns $30,000 each year to the city.
Also, the respected Louisiana Youth Elite Tiger sports organization was given permission to hold a red-light drive on Main Street on Aug. 6.
Finally, Mayor Nelson said that a grant has been finalized for a floating kayak launch and installation should happen in the next few months. Similar docks have been installed in Breaux Bridge and Loreauville, and are providing easy access to the Teche for recreational use.
Cory Werk of Bayou Teche Experience told the Teche News that the Breaux Bridge dock is proving very usable and is a popular addition to Parc des Ponts. Docks are planned all along route of the Bayou Teche Water Trail, which was designated last year.
The St. Martinville dock is to be installed just south of Evangeline Oak, near the boat ramp, but will be movable. Nelson said that the dock can be placed at the festival grounds for events such as the Tour du Teche.