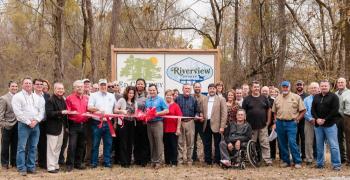 Ominous weather did not put a dampener on the ribbon cutting for two new subdivisions on the Atchafalaya River Highway (La. 105) north of I-10 near the Butte La Rose exit.

Approximately 50 people attended including St. Martin Parish President Guy Cormier and state Rep. Mike Huval. Representatives from the St. Martin Sheriff’s Office, the state Department of Wildlife and Fisheries, surveyors, foresters and others were also on hand to celebrate the completion of the project which took years to complete.

Riverview Estates, with 30 lots, is the first subdivision you meet traveling north on Atchafalaya River Highway. The Ed Courtney development is approximately a mile further down and has 20 lots. Both projects were developed by St. Martin Land Company and are water and sewer “pre-permitted.”

Cormier cited the development as yet another instance where St. Martin Land has been instrumental in making a significant and positive impact in St. Martin Parish and, in this case, at the gateway to our most treasured natural resource, the Atchafalaya Basin. He thanked those in attendance for their role in bringing this project to fruition and for those who have shown their support.