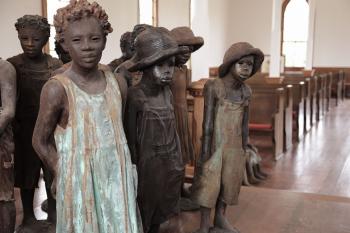 The St. African American museum presents a culture tour May 21-22 featuring visits to the historically infamous Whitney Plantation and the New Orleans annual Mid-City Bayou Boogaloo Festival.
Tickets are $100 per person and includes bus transportation, admission for the Whitney Plantation and a night’s hotel accommodation in New Orleans.
Proceeds help support St. Martinville’s African American museum.
In 2014, the Whitney Plantation, originally known as Habitation Haydel, opened its doors to the public for the first time in its 262-year history as the only plantation museum in Louisiana with a focus on slavery. Also known as the Big House, it was described as “one of the most interesting in the entire south” by Charles E. Peterson, former senior landscape architect of the U.S Department of Interior.
“Whitney Plantation is a refreshing new start to interpreting the life of enslaved Africans on a plantation,” said Danielle Fontenette, curator of the African American Museum.
“The size of our museum does not allow us to have a multitude of exhibits, so outreach programs and learning opportunities are an essential part of small museums.”
The same evening the adventure continues along the Bayou St. John with the 11th annual Bayou Boogaloo Festival, a NOLA- style party with live music from the likes of Irma Thomas and Mason Ruffner, food, arts, and handicrafts.