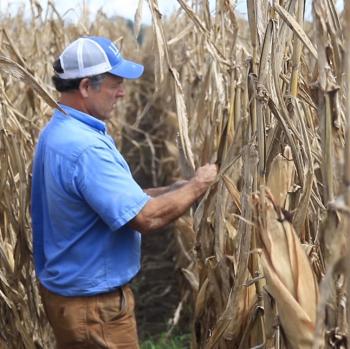 CROP LOSS – Donald Schexnayder surveys the damage to his corn crop in West Baton Rouge Parish after heavy rainfall and historic flooding inundated his farm in August. Total agriculture losses from the flood are now estimated at more than $277 million.

There’s never a good time for disaster, but the timing of the flood of 2016 was especially catastrophic for farmers in Louisiana.
According to the LSU AgCenter, agricultural damage from the August flooding is now estimated at $277 million, with rice and soybeans taking the biggest hit. Kurt Guidry, an economist with the LSU AgCenter, said the losses are likely to mount higher as time goes on.
“Damage to each of those are in the 68 or 69 million dollar range,” Guidry said. “Those two are by far the largest two commodities from a dollar standpoint that were impacted from the storm.”
Ripe rice was still in the fields, corn harvest was underway, soybean harvest was quickly approaching and sugarcane needed to be planted. All have were hampered in one way or the other by the August and September rains.
High waters have taken its toll on Louisiana’s rice crop. Harvest-ready rice sat in fields soaking up the record rainfall. Farmers are doing what they can to mitigate the water in fields and preserve the quality of this crop.
“We have been in wet conditions for so long–between the rainfall and the flooding in certain areas,” said Richard Fontenot, an Evangeline Parish rice grower and third vice president of the Louisiana Farm Bureau. “I’m afraid we are going to get a tremendous amount of quality loss with the germination of seed out in the field.”
Record rainfall also caused problems for corn farmers as corn sat ready for harvest in the fields. Many farmers are just now starting after almost daily rainfall post-flood. Donald Schexnayder, West Baton Rouge corn and soybean farmer, compares the damage to that of a tropical storm, but said the damage could have been worse.
“We got some sprouting, we had some damage, “ Schexnayder said. “Whether its 15 percent damage or not, I figure somewhere in that area. I mean, we can live with that.”
The flooding greatly affected Louisiana’s soybean crop as well. Like corn, many soybean crops were ready for harvest. Farmers are now faced with beans sprouting inside the pod, ruining the bean entirely. Clayton Hurdle, a soybean farmer in Iberville Parish, said he’s pumping water off the fields constantly in hopes that his younger soybeans will make up for the significant losses he’s expecting to see.
“If we can get out of here with a 50 percent loss and recoup our expenses and start over next year, you know that’s about the best case scenario right now,” Hurdle said.
The heavy rainfall left much of the sugarcane in Youngsville lodged and underwater only weeks before harvest. According to Stacy Albert, Lafayette Parish sugarcane grower, the cane lodged down is not going to stand back up because the growth period has effectively stopped. The biggest concern is to get the ground dried up to plant next year’s crop, an almost impossible chore with almost daily rains in his area.
“We’re trying to get the planting squeezed in the time frame that we have left,” Albert said. “With the mills starting processing on Sept. 27, we are down to a few weeks to get a crop planted and there is very, very little cane planted around here.”