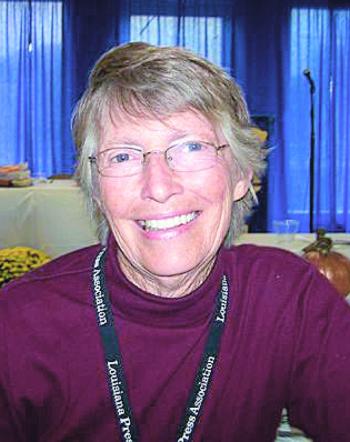 It is so wonderful to have nice weather at last. A bit cool in the shade, but working in the yard is heavenly. I’ve been trying to clean up a few flower beds, a real chore, since I’ve been pretty neglectful this past month.
One of the beds is mostly filled with St. Joseph lilies or amaryllis, crinum and some bromeliads, but the latter are being crowded out. Amaryllis, on the other hand, are multiplying and growing out into the grass. I dig the outliers up but they seem to develop faster than I can relocate them.
Right now the only things growing ornamentally wise in my yard are pentas, allamanda and some hibiscus. My golden rain tree still has huge clusters of blossoms but they never looked as beautiful as in past years because we had those heavy rains just as the tree bloomed.
The lack of flowers makes this my least favorite time of year. I can remember, vaguely now, that at least the first snows covered the bareness of plant life when I lived in the north. It was pretty at least and you couldn’t see the bleak brown and dead foliage. Of course, you also couldn’t get your car out of the driveway because the snowplows had pushed a levee of snow in your drive. That’s if your car would start in the cold mornings.
Here’s a memory: The first car my husband and I bought when we were newlyweds in Michigan was a Pontiac convertible. It was fire-engine red, loaded with chrome and bling and it was huge and beautiful. We bought it from a car lot at night when the lights made everything shiny and gleaming. I believe it was the very next morning when we couldn’t get it started and had to call the local garage for a jump start. That was just the beginning. The car hardly ever started without help. The clutch had to be replaced. The convertible top rear window broke. The top mechanism didn’t work right. We were such suckers!
I’m not sure now, but I think we finally gave up and traded it for one of those Studebaker cars that looked the same front and back. That one we left with a marina owner in Cincinnati telling him if he could get all the papers transferred without us, the vehicle was his. We never heard from him.
I’m beginning to hear the shotguns from the spillway. I’m seeing lots of trucks passing on the road heading to the landing towing boats festooned with palm fronds, painted camouflage, with barking dogs in cages. The Belle River parking lot is full most every day.
I attended a fundraiser for St. Elizabeth school in Paincourtville, La., last weekend and it was a hoot. The weather that morning was terrible but by 3 p.m. it had at least stopped pouring.
The event was called a Color-A-Thon and it involved buckets and bags and sacks of colored, dry corn starch which everyone threw on everyone else. If you got within a few hundred yards of the school you got colored. People had colored faces, colored hair, colored clothes. The pavement was multi-colored. When the 5K runners crossed the finish line, they were welcomed with more starch!
Someone told me later that the colored starch washed out easily. I don’t know if the clothes survived! I heard they raised quite a bit of money, but don’t know any details. It was hilarious to see all these kids, parents, teachers, grandparents all running about throwing colored corn starch at each other.
Lots of dads there and I thought to myself what great sports they all were. One dad was pushing a stroller carrying young twins, all of whom were purple, yellow, green, pink. The babies looked a bit stunned but they weren’t crying!