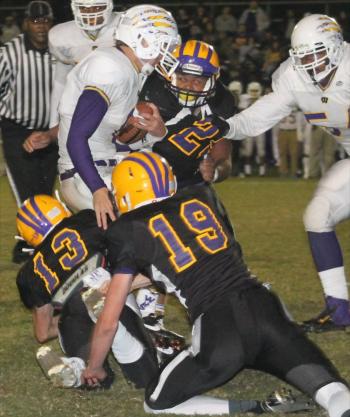 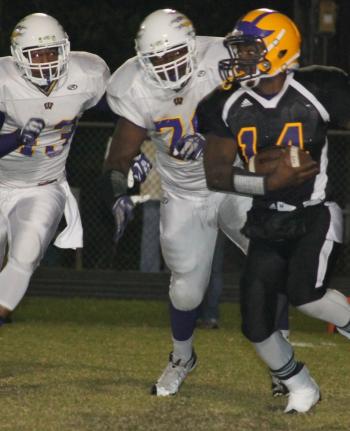 A disappointing season ended on a disappointing note for St. Martinville as the Tigers lost a 30-28 squeaker to Westgate of New Iberia last Friday.

The District 5-4A loss, which left the ’Ville with a 3-7, 1-5 record, ended St. Martinville’s slim hopes of earning a berth in the state playoffs.

Unfortunately, he also gave up two costly interceptions, his 9th and 10th of the year.

The Tiger defense, while coming up with several key stops, struggled for much of the game, giving up 340 yards to the visiting Tigers.

Westgate scored on its first possession, marching 70 yards in 7 plays, with Bryson Livingston, who would finish with 130 yards on 24 carries, doing most of the damage. The TD came on a 20-yard pass from Aaron Bird to Malcolm Peter. But Bird missed the PAT kick, leaving the score at 6-0.

After an exchange of punts, SM had the ball back at its 22 and Mitchell got the Tigers moving with a 19-yard toss to Jamail Ledet and a 29-yard keeper to the WHS 27. On 4th-and-5 at the 22, Mitchell found Ledet open for the TD on the first play of the second quarter. Luke Berard’s PAT kick was deflected, leaving the score knotted at 6-all.

The ’Ville took advantage of a Westgate fumble near midfield to strike for its second TD. After an interference penalty gave the Tigers a first down, Mitchell hit Malik Anthony for 25 yards and then went back to the senior receiver for the 18-yard TD. Mitchell and Ledet teamed up for the 2-point conversion to put the Tigers up 14-6.

Late in the half a costly holding penalty wiped out Ledet’s 35-yard return of a Bird pass for a touchdown but the Tigers had the ball at the WHS 42. But three plays later Mitchell tossed an interception and Westgate capitalized on the turnover by going 75 yards and scoring on a Bird-to-Bryrick Broussard pass with just 15 seconds on the clock. The 2-point conversion attempt failed and St. Martinville clung to a 14-12 halftime lead.

The lead vaporized when Westgate’s Douglas Henry returned the second half kickoff 82 yards for a go-ahead touchdown. Livingston’s 2-point conversion put the New Iberia Tigers up 20-14.

But The ’Ville quickly regained the lead after Ledet returned the ensuing kickoff 45 yards to midfield, setting up a quick scoring drive. Mitchell found Justin Picard open for a 16-yard TD strike and Berard’s PAT kick put SM up 21-20.

The SM defense came through with a big play moments later, stopping Livingston for a loss when Westgate tried to convert a 4th-and-7 situation at its own 23.

But the opportunity was wasted when Mitchell threw his second pick and Westgate took over at its 19.

The New Iberia team marched all the way to the SM 13 but Bird was separated from the ball on a hard tackle and The ’Ville recovered to end the threat.

The Tigers couldn’t pick up a first down and Westgate got the ball back at its 40. Two offsides penalties against SM helped Westgate drive to the Tiger 3 but a determined SM defense held the visitors to a 21-yard Bird field goal that put Westgate up 23-21.

After getting the ball back St. Martinville couldn’t convert a 4th-and-3 situation and Westgate took over at the SM 43. Ramon Guidry, who finished with 127 yards on 22 carries, opened the possession with a 30-yard run to the 13, but the SM defense again forced a field goal. Bird hit it from 23 yards out but the Tigers were offsides, giving Westgate a first down at the 4. Two plays later Bird snuck in from 3 yards out and added the PAT kick to boost the Westgate lead to 30-21 with 2:27 to play.

The never-say-die Tigers stormed back and moved into Westgate territory with the help of two pass interference penalties against the visitors. Mitchell connected with Ledet for a 15-yard TD and Berard added the PAT but only 33 seconds remained in the game and the Tigers still trailed 30-28.

The onside kick was unsuccessful and Westgate was able to run out the clock and seal the victory.