Can The ’Ville stop STM? 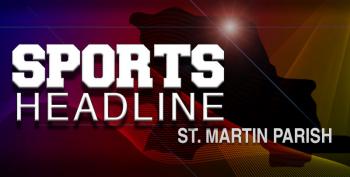 As high school teams enter the home stretch of the 2013 regular season schedule, this week’s big question is whether the St. Martinville Tigers have a chance to derail the St. Thomas More juggernaut?
While The ’Ville prepares for its biggest test of the year, Cecilia’s Bulldogs will look to get a much needed win against Northside while Breaux Bridge has the week off with an open date.

STM at SMHS
If St. Martinville can put together a whole game like the second halves the Tigers played against Cecilia and Teurlings Catholic, coach Danny Carroll’s 3-5 squad could possibly pull off a major upset of the 8-0 Cougars.
That’s a big if, but the Tigers showed their hurry-up attack can strike quickly, notching four second half touchdowns in a 35-28 win over Cecilia and three in a 35-28 loss to Teurlings.
“But don’t forget we also played real good defense over that period,” Carroll points out. “Our kids played hard and did some really great things. We just ran out of time. I credit our kids for their heart and for finishing strong.”
Carroll feels it was a great accomplishment for the Tigers to almost beat Teurlings after taking a 49-6 licking from the Rebels last season. “We are excited about that,” he says, “but we’re still disappointed over the loss.”
The healthy Tigers will face a STM team that is averaging more than 34 points a game with a defensive unit that has held three opponents scoreless and another three to only one touchdown each.
“There’s no question they’re a good football team,” admits Carroll. “And it’s hard to simulate their speed in practice. But we look at the game as an apple ripe to be picked. We just need to get an early start and play in the first half like we have in the third and fourth quarters. You can never know what might happen in football.”

CHS at NORTHSIDE
While a struggling Bulldog defense gave up 54 points to Breaux Bridge, the Cecilia offense put up more points against a solid Tiger defense than any other team had managed this season.
“And we should have had a couple of more scores,” coach Terry Martin said Monday, pointing out that his ’Dogs suffered an interception in the end zone at one point.
Martin blamed his team’s poor defensive effort on poor tackling. “In reviewing the game film we counted at least 36 missed tackles,” he said. “It’s been our Achilles’ heel all year, even though we constantly work on it in practice.”
Senior running back Damon Patt had his best game of the season, rushing for 117 yards and two touchdowns, including a 73-yarder.
“And he finished that long run with a dislocated shoulder he hurt when stiff-arming a defender,” Martin said with admiration.
Fortunately, the shoulder popped back into place and Patt was able to return to action. He’ll be held out of hard contact practice but should be ready to go against Northside.
The Vikings (2-6, 1-3) have been hot and cold on offense this season, suffering three shutouts and scoring only six points in another game, while running up 45 against Opelousas and 40 on St. Martinville.
“They’re just so athletic,” observes Martin. “And they play really hard. We’ve really got to get better at tackling to stay with them.”
Despite his team’s 1-7 worksheet, Martin says he couldn’t be prouder of the way his team has stuck with it. “The kids are still playing so hard,” he says. “It’s a real credit to them and our assistant coaches that they’ve stuck with it. I expect we’ll give it our best again over the last two games.”

BREAUX BRIDGE
The Tigers easily surpassed their previous season high of 33 points with the 54 points outburst against Cecilia.
Junior Edward Batiste rushed for 127 yards and two touchdowns, drawing praise from coach Paul Broussard. “He ran well and our offensive line did a really good job.”
And Corey Abraham also topped 105 yards rushing although he’s been used mostly on defense thus far this season.
Senior QB Lane Landry finished with 8-of-12 completions without an interception for 139 yards and a TD. “Lane did a good job and made some smart decisions,” says Broussard.
But Broussard was a little disappointed with his defense. “While Cecilia did a good job against us, we tackled very poorly,” he said.
Broussard says the bye week will give his team a chance to heal a bunch of minor nicks and bruises, but he will try to keep practice sessions close to the normal routine.
The Tigers close out regular season action on Nov. 8 against St. Thomas More.