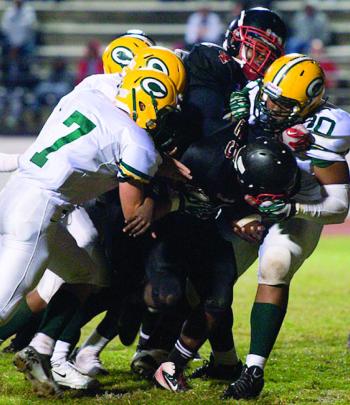 For the fourth time this season the Cecilia Bulldogs fell just short of victory as Northside came out on top of a 32-29 District 5-4 battle last Friday.
The Bulldogs (1-8, 0-6) led briefly in the second quarter and then came from behind on an electrifying 80-yard punt return by Raymond Calais early in the final stanza to go up 29-26. But the Vikings struck for the go-ahead TD with just 40 seconds on the clock to dash Cecilia hopes.
Calais, a speedy sophomore, scored two other touchdowns on runs of 31 and 4 yards and finished with 180 stripes on 17 carries.
With the victory Northside improved to 3-6 and 2-3.

The Vikings scored on their first possession, turning a good kickoff return into a quick touchdown when Deion Ben snared a 44-yard pass from Ethan Rose just 2½ minutes into the contest. The PAT kick failed.
The score remained at 6-0 until early in the second stanza when the Bulldog defense stopped the Vikings on a 4th down attempt at the CHS 41. Runs of 12 and 45 yards by Calais set up Damon Patt’s 2-yard TD. Tyler Doucet added the PAT to put the ’Dogs up by 7-6.
But Northside answered with two scores before halftime. First Cozenski Alfred capped a 10-play, 65-yard drive with a 1-yard TD. And just before intermission he added aother 1-yard TD to end a drive highlighted by a 44-yard pass from Rose to Ben that enabled the Vikings to claim a 20-7 halftime advantage.

Cecilia took the third quarter kickoff and moved 59 yards in just 3 plays with Calais going 31 yards for the score. Doucet’s PAT kick cut the deficit to 20-14.
But Northside struck back. After a TD was nullified by a penalty Rose reached pay dirt on a 9-yard keeper. The missed PAT kick put the score at 26-14 early in the third period.
The Bulldogs flubbed a golden opportunity when the Northside punter’s knee touched the ground as he reached for a low snap, setting Cecilia up at the Viking 25. But 3 plays later the ’Dogs turned the ball over on a fumble at the 5.
Cecilia managed to close the margin to 26-21 on a 4-yard TD by Calais late in the period.
Calais came through big time early in the final stanza when he fielded a Northside punt and raced 90 yards for a touchdown. A Landon Roberts-to-Patt pass added the 2-point conversion to put Cecilia on top by 29-26.
After an exchange of punts, the Vikings got the ball back at their 42 with 5:07 remaining. A pass interference penalty against the Bulldogs helped move Northside into Cecilia territory and Alfred got his third touchdown from 4 yards out with 40 seconds remaining to put the Vikings back on top.
Time ran out on the Bulldogs as they tried desperately to score in the final seconds.
Alfred led all rushers with 171 yards and 3 touchdowns on a workhorse 26 carries and QB Ethan Rose hit on 13 of 23 pass attempts for 221 yards and a TD.
The Bulldogs close out regular season action with a long road trip to South Terrebonne in Bourg.