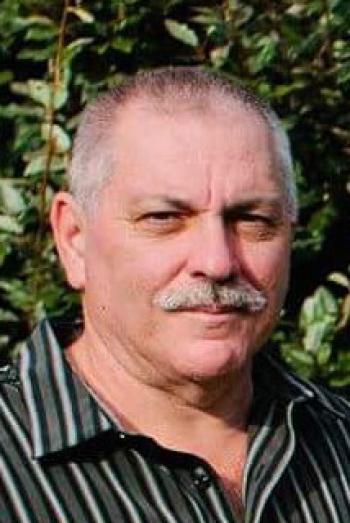 Catahoula – Funeral services were celebrated for Hugh Mark Courville at 10 a.m. on Tuesday, May 23, 2017, at the Dion Hall in Catahoula. Rev. Dore Langley officiated. Hugh wase laid to rest in Lady of the Lake Cemetery in Catahoula.
A gathering of family and friends was held at the Dion Hall on Monday from 10 a.m. until 10 p.m. and on Tuesday from 8 a.m. until time of services.
Hugh was born November 29, 1962 in St. Martinville to the late Otis Courville and the late Irene Bourque Courville. He passed away Friday, May 19, 2017 at his residence. He was 54.
Hugh was an aircraft mechanic and worked with PHI in Lafayette for 36 years. He was a man who was talented in many trades and was always eager to lend a hand to anyone in need. Many times he would not only cut his grass, but cut his families’ yards as well. That was just one of the many ways he would go out of his way to help someone else. Not only was he handy, but he was a great cook and baker, with Syrup Cake being one his specialties. But above all, Hugh was a family man and the love for his them was greatest to him. He cherished every moment with his grandchildren, who lovingly call him Pop. Hugh leaves behind many fond memories that will always be remembered by all who knew and loved him.
Survivors include his wife of 35 years, Anne Vannoy Courville; his children, Heathe M. Courville and wife Heather, Hoyt M. Courville and wife Kayla and Harlee M. Courville; his grandchildren whom he adored, Anniston Clare Barrett, Ashton Michael Courville and Elliot Ray Courville; his brothers, Sim Courville and wife Brenda, and Otis “Cheyenne” Courville and wife Pennye; his in-laws, Clarence and Etta Vannoy; and his Godparents, Jeanne Hipp and Alan Bourque.
Along with his parents, he was preceded in death by his infant grandsons, Nyle and Griffin Courville; and his sister, Yvette Marie Courville.
Serving as pallbearers were Hoyt, Sim and Cheyene Courville, Pat Stephenson, John Vannoy and Kurt Latiolais. Honorary pallbearers were Heathe Courville, Ricky Louviere, Chuck Latiolais, Clarence and Perry Vannoy, Douglas Courville, Chad Theriot, and his grandchildren, Anniston, Ashton and Elliot.
To view the online obituary and video tribute, and to share memories of Hugh, please visit www.evangelinefuneralhome.com.
Evangeline Funeral Home of New Iberia was in charge of arrangements.