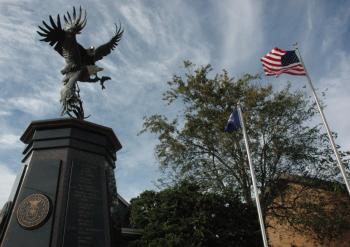 Veterans Day celebrates the service of all United States military veterans. November 11 is observed as Veterans Day, an official U. S. holiday which honors people who have served in armed service, also known as veterans.
During the month of November to honor Veterans a Memorial Wall has been created at Longfellow-Evangeline State Historic Site. Veterans and guests who visit the park will be able sign their names or the names of loved ones who are serving or have served in the military.
On Saturday, Nov. 9, 8:30 a.m. - 10 a.m., the French roundtable topic will be “St. Martin de Tours.” St. Martin is the patron saint of soldiers and the namesake of the Mother Church of the Acadians. A special flag raising ceremony by Scout Pack 455 and Troop 55 will be held at 8:45 a.m. For more information call Longfellow-Evangeline at 394-3754.
Other Veterans Day events taking place in St. Martin Parish are:
• Monday, Nov. 11, 11 a.m., Veterans Park on the corner of Berard and Courthouse streets in Breaux Bridge. Sponsored by Bonin-Thibodeaux VFW Post No. 4215.
•Tuesday, Nov. 12, 9 a.m. Veterans Day celebration at Cecilia High School.
•Thursday, Nov. 14, 7 p.m. KC Hall in Parks, Council #4927 honoring local veterans and spouses.
Veterans Day also coincides with other holidays such as Armistice Day and Remembrance Day, which are celebrated in other parts of the world and also mark the anniversary of the end of World War I. (Major hostilities of World War I were formally ended at the 11th hour of the 11th day of the 11th month of 1918, when the Armistice with Germany went into effect.)