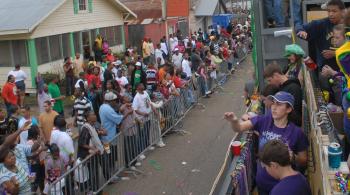 In a special meeting on Thursday, Feb. 18, the St. Martinville City Council adopted an amended ordinance regulating future parades.
The vote had been postponed during the regular council meeting earlier in the week at the request of Shone Pierre, the Newcomer’s Club attorney. The delay allowed Pierre and city attorney Allan Durand to address Pierre’s concerns about some of the wording in the proposed ordinance.
Friction between the council and community that followed the cancellation of the 2016 Newcomer’s Mardi Gras parade continued at the Feb. 15 meeting, but a calmer atmosphere prevailed at the special meeting.
After a finding in federal court that the city’s parade ordinance is unconstitutionally vague, Durand presented a new draft intended to remedy shortcomings in the original. Durand said that he used the well-tested New Orleans city parade ordinance as a model.
Pierre said that, while neither she nor Durand were entirely happy, the new ordinance satisfies the goal of establishing a fair and consistent procedure for processing parade applications that should meet constitutional standards.
Action to reconcile the amended ordinance was taken quickly to allow a timely issuance of a permit for the SMILE/Headstart Easter parade scheduled for Saturday, March 19. Following passage of the ordinance, Ann Mitchell of SMILE was the first applicant to be issued a permit under the amended process.
Asked about the extent of the changes that were made to bring the ordinance into compliance, Durand said that seven of the 12 provisions from the old ordinance are unchanged.
Under the new process, an application is first evaluated by the chief of police according to a listed set of standards. His evaluation will include crowd size and age, barricade requirements, emergency access and past history of the event and applying organization, and other criteria. The chief’s recommendations, along with other requirements, will be considered by the council and public input will also weigh in the decision.
District 4 council member Debra Landry had cautioned during the Feb. 15 meeting against making permit applications more difficult than necessary with overly strict regulation. Landry was satisfied with the resulting ordinance. She joined the rest of the council in voting for passage.
Amending the code is only the first step in the process of returning the Mardi Gras parade to St. Martinville. Requirements stated for involvement of Sheriff’s Office personnel are among the obstacles that remain to be overcome.
In other business, Father Michael Champagne was given permission to hold a community family day festival called “Mercy Fest” at the St. Martinville Festival Grounds on Saturday, April 1. There will be no charge for attendance at the alcohol-free event which will highlight the life and work of Mother Theresa. Gates will open at 8 a.m. and a full schedule of events will continue until 8 p.m.
District 1 councilman Mike Fuselier and Landry presented their finding that there is sufficient space between the baseball diamonds at Adam Carlson Park to allow a football field to be sited in the park. The Louisiana Youth Elite Tigers Football Team will use the location as their home field. Fuselier said that the city intends to have the field ready by August.