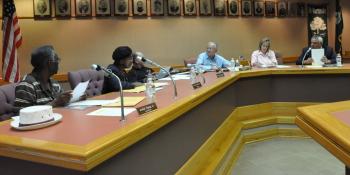 The City Council Monday threw its “unanimous and enthusiastic” support behind plans for a bigger and better South Louisiana Community College campus in St. Martinville.
Parish Councilman Craig Prosper said the re-energized facility envisioned by SLCC would create jobs as well as provide an entry-level labor force in the city.
“There will be 600 kids enrolled at any given time,” he said. “It’ll be a big boost to the economy.”
The Louisiana Legislature has appropriated $8 million for the construction of a new school to replace the old Louisiana Technical College Evangeline Campus. The money has been bonded and the funding is ready to go.
The St. Martin School Board has agreed to transfer the old St. Martinville Senior High football field – now barren ground in the block bounded by Martin Luther King Jr. Drive, West Berard, South Theater and Honore streets – to SLCC. A part of that city block is occupied by SMILE’s Early Head Start Child Development Center.
This is one block over, catercorner, from the existing Evangeline Campus.
However, SLCC Chancellor Dr. Natalie Harder recently said in a town hall-style meeting here that they are looking for a minimum of nine acres for growth and access to the new campus.
There is no money to buy the land. SLCC is asking for a donation or a direct swap for the existing property.
At Monday’s council meeting, Prosper said SLCC, the city, and the area’s legislative delegation have been in negotiations with three property owners.
Mayor Thomas Nelson said that should the negotiations fall through and SLCC decide to move the Evangeline campus elsewhere, “... we got a stick to fight with.”
Nelson said the late Sydnie Mae Durand, longtime state representative, put language in the bill funding a new technical school requiring it to be located in St. Martinville.
If push comes to shove, he said, the school board might be prevailed upon to donate or lease the block just north of the old football field that contains the old high school building and buildings, now vacant, that housed the district attorney’s office when the parish courthouse was being renovated.
“The school board is spending money just to keep that building (the old high school) safe,” Prosper noted.
Harder has previously said the properties in that area are not suitable because there is not enough room for the campus to grow and the residential nature of the surrounding neighborhood is not conducive to some of the programs the campus would offer. Access is also a problem, she said.
In addition to vocational and technical courses, the campus would offer general education classes so that students could stay at home and work toward a college degree without the commute to Lafayette or Baton Rouge.
To justify enough participation for such courses, numerous classrooms can be joined via video technology that lets the teacher see and hear the students and of course vice versa.
The current campus was built in 1963-64 as a branch of the T.H. Harris Vocational Technical School and soon renamed the Evangeline Area Tri-Parish Vocational-Technical School. It was redesignated the Louisiana Technical College Evangeline Campus and then the Evangeline Campus of Acadiana Technical College (ATC).
On July 1, 2012, SLCC merged with ATC to form one of Louisiana’s largest comprehensive community colleges with campuses in Abbeville, Crowley, Franklin, Lafayette, New Iberia, Opelousas, St. Martinville, and Ville Platte.
SLCC was established in 1997 as a public, two-year institution with campuses in Lafayette and New Iberia. It originally belonged to the University of Louisiana System and in 1999 joined the Louisiana Community and Technical College System.