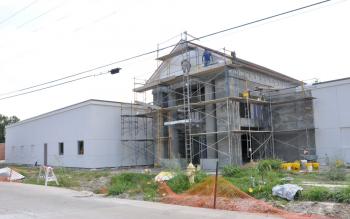 The St. Martin Parish Courthouse Annex under construction in 2009. Parish Government rededicated a 4.5-mill property tax originally levied for library construction to finance the annex and renovate the main courthouse, built before the Civil War. Parish Council is now considering asking voters to rededicate revenue from the tax for drainage improvement and to refurbish parks.

Proposal would be before voters in December
Ken Grissom
ST. MARTINVILLE

Faced with a choice of giving a tax break or renovating and expanding the antebellum parish courthouse, voters back in 2005 chose the latter.
Another such decision approaches as the Parish Council now considers paying off the courthouse debt and then asking voters to rededicate the revenue stream to borrow more money for drainage work and maintenance of existing recreational facilities.
The issue came up last week at an informational session of the council’s Administrative and Finance Committee.
Parish President Guy Cormier said conditions are favorable to pay off the 20-year bonds for the courthouse renovation and pledge the revenue from the 4.5 mills to programs of drainage improvement and fixing up parish parks, most of which haven’t been seriously refurbished in many decades.
Both programs would be laid out very explicitly before the voters in much the same way as the St. Martin School Board has detailed improvements on the April 9 ballot, Cormier said.
“If you tell the taxpayer what you’re doing with the money, he’ll support you,” Cormier said.
After numerous public appearances by Cormier, Assistant District Attorney Chester Cedars and others to explain the issue, voters in 2005 authorized the rededication of a 4.5-mill tax originally passed to build libraries. Parish Government parlayed that continuing revenue stream into a $7.9 million bond issue for the project (bolstered, after running afoul of soaring construction costs in the wake of the 2005 hurricanes, with another $2.1 million in state capital outlaw funds).
The money was used to build an annex to house the clerk of court, assessor and registrar of voters, and to build a Breaux Bridge home for the Council on Aging and other parish agencies, and of course renovate the old brick courthouse, originally built before air conditioning, electricity and indoor plumbing.
Any surplus cash from the current dedication would have to be spent on the courthouse complex, Cormier said. Projects in mind include a secure parking lot for employees, and the purchase of property nearby for the drug court, he said.
If the council approves, the rededication issue would be put on the ballot in December, Cormier said.
Other items before the council included:
•Considered granting Cormier authority to contract with Southern Contractors LLC to install a new wastewater treatment plant at the Industrial Park, also known at the old Martin Mills. The company’s low bid was $265,190. Budget on the project is $350,000.
•Heard a report from Fabian Tucker, director of Administration, about the 16-year-old Summer Food Services Program in which, with the help of the St. Martin School Board and grant monies, feeds breakfast and lunch to increasing numbers of school-age children during the summer. Tucker said last year’s program served 18,548 breakfasts and 27,937 lunches. It employed 25 cafeteria workers at numerous schools around the parish.
•Considered a request for a parish ordinance prohibiting the public display of genitals, pubic hair, buttocks or underwear.
•Considered a request for an ordinance closing Clayton Boudreaux Memorial Park in Catahoula at night.
No action is taken by the council when meeting at a committee of the whole. The next regular meeting, when many of these items will be acted upon, will be April 5.