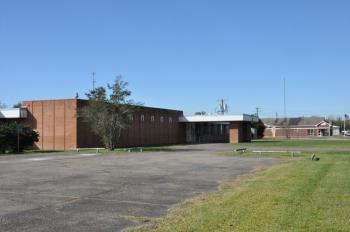 ST. LUKE’S MEMORIAL HOSPITAL in Arnaudville sits vacant awaiting a new tenant. The hospital district’s board is negotiating with an unnamed firm that would offer in-patient physical therapy. Other interests would like to make it a French immersion center attracting tourists and international visitors.

Now that Louisiana is officially the happiest state in the Union – proclaimed so by scholars at the University of British Columbia utilizing data gathered by the Centers for Disease Control (http://news.ubc.ca/2014/07/21/unhappy-cities/) – it stands to reason that tourists will be flocking down here by the hundreds of thousands more than they already are to find out why.
We, of course, know why. It’s called joie de vivre, French for joy of living.
French.
The English phrase “joy of living” doesn’t quite express it, even up in Shreveport, one of the happiest cities in the nation, according to the UBC study, along with Lafayette, Baton Rouge, Houma – way more happy towns than any other state. French says it better, given the influence of French-speaking peoples on our food and drink, music and dance, even up in Shreveport.
So some folks here in Arnaudville, which is both a seat of Acadian agrarian culture and a thriving colony of independent artists, are wondering why their neighbors would object to a center here to propagate the French influence. It’ll be great for tourism, they say.
“Tourism contributes $17 to $19 for every dollar of investment – why aren’t we encouraging more people to come to Louisiana to experience the way we live?” demands George Marks, artist, entrepreneur, provocateur (says it better than “agitator,” n’es pas?) and advocate for a revolutionary “French immersion campus” here in Arnaudville.
But not everybody in the community is bowled over by the idea, party because it involves the use of the city’s only hospital.
State Sen. Fred Mills Jr., a steadfast champion of Acadian and Creole culture, blew some life into the embers during the Opelousas-St. Landry Chamber of Commerce’s recent legislative luncheon, volunteering to facilitate the necessary but long-avoided joint meeting of the two parish councils, both of which, or their police jury predecessors, created the First Hospital Service District of St. Landry and St. Martin Parishes, to build and fund the old St. Luke’s back in the 1960s.
Mills says he likes the idea of turning the empty hospital into a place where people from all over the world can come to learn about Louisiana cooking, language, music and whatever else emerges as distinctively Creole-Cajun. The plant would serve as classrooms, dormitory and kitchen for these seekers of our unique culture.
The spark for the idea came several years ago when French-table hostess Mavis Fruge attended a six-week French immersion program at the Universite Ste-Anne in Nova Scotia, and thought Arnaudville should have something like that. About that same time, David Cheramie, then director of the Council for the Development of French in Louisiana (CODOFIL), asked Fruge and George Marks, guiding light behind NuNu’s Arts Collective, to anchor such a project, already much in demand. It was Fruge and Marks who suggested St. Luke’s.
The French Consulate, LSU, Tulane, the French Ministry of Education, the Louisiana Department of Education, the state Department of Culture, Recreation and Tourism and the Louisiana Division of the Arts have expressed an interest in a French immersion program here.
Marks and Fruge approached the Louisiana Cultural Economy Foundation, established in 2005 by then Lt. Gov. Mitch Landrieu, to consider managing the facility. The foundation’s director, Aimee Smallwood, suggested that the tax funds accrued by the hospital district – still over $1.5 million despite an annual drain of around $100,000, according to the latest audit report – be managed by the Community Foundation of Acadiana, so that the French immersion center could be run on the interest.
Another big supporter of the idea has been St. Landry Parish President Bill Fontenot, who steered the Parish Council last year into a vote to disband the hospital district.
While St. Martin Parish President Guy Cormier has been in sympathy with the concept, he and the St. Martin Parish Council – which must also act to complete dissolution of the district – have demurred because of fiduciary concerns.
“There are laws that govern the disposition of public assets,” St. Martin Parish legal advisor Chester Cedars said at the time. “Let’s don’t be in a hurry.”
The issue is not just the cash, he said, but the disposition of all the district’s assets, including the building.
“It’s just a matter of due diligence,” Cormier said last year. “Can tax money collected for health care be used for cultural tourism?”
He also said at the time that the hospital district’s board of directors should weigh in on the issue.
Last year the hospital district board was said to be negotiating with a company that runs detox centers. The board now says it is the process of leasing the vacant hospital to an as-yet-unnamed physical therapy company an in in-patient facility.
“Why haven’t we collectively moved on this?” demands Marks. “Ten years means that over a million dollars was lost to depreciation from the St Luke fund. Shame on us, our elected officials, our appointed officials and the system as a whole for not allowing for this to happen and more importantly, for not developing a comprehensive plan to address this building.”
Marks expressed his gratitude to Mills, Fontenot and Cormier for their support.
Board members include Larry Guilbeau and Richard Todd Dugas of Cecilia, and from St. Landry, Lena Olivier and Kenneth Lee Quebedeaux, chairman.